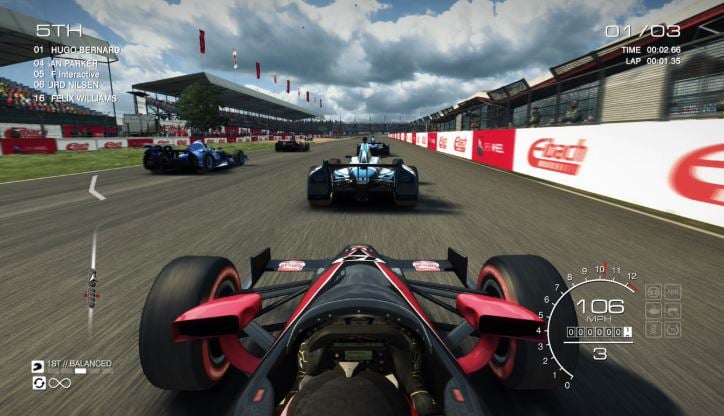 Feral Interactive and Codemaster brings to Switch its last generation driving title ready to deal with the serious lack of realistic driving / simulation titles in the Nintendo hybrid. Impressive graphics and great care in gameplay options are its two great standards.

In the main menu we can find 5 game modes. And of course, several options where you can configure almost everything, from gesture control, to the buttons of the GameCube controller. At the end of the whole we will find the free DLC content.

The graphic quality, as already mentioned before, is of an exceptional level. The reflections in the sheet, the particles when leaving the section … All of this base, because in the DLC area, there is a package of additional textures to further highlight the game in TV mode. But if you don’t have that free gigas, don’t worry, the base quality is amazing. Are you worried that your Switch will get very hot or do you want the battery to last longer? Then go to options and choose from the 3 available optimizations:

Choose the one you choose, the frame rate per second is very solid and there is no serious loss at any time. Even less in the Energy Saving mode.

Regarding the music, although original, is little varied and seems taken from a clothing store. It ends up being repetitive soon. The same goes for the comments of the commenters. Both the track, as the team, as the female voice that tells us between menus. A pity because there was potential in the idea.

And spinning a previous issue, another idea that is halfway to curdling, is the AI cooperation with the teammate. With some “tighten” or “hold position” mechanics, we can indicate what we want. Well, its classification affects the team. But in the end, if you stay first, the team will win and what you usually do is drag yourself (especially if we put the difficulty in Maestro). In addition it does not contribute anything. In the sense that you can not do team techniques such as blockages, help in the rebuild, delay the platoon … It behaves like an adversary AI, even blocking your way.

The ugly thing: Custom controls are not saved, and once you’ve restarted the game, you will have lost your settings. Small error easily corrected. The original game did have a generous multiplayer that has disappeared here. A very important factor. Will they add it later? Only time will tell, but it is a serious loss. It doesn’t even have a classification for the times. He misses some triggers in conditions to control the braking, but that is not a thing of the game, but of the console.

The weird thing: Progress in the seasons is slow and monotonous. Luckily there is a boost mode of experience that I recommend activating as soon as possible. That a game that rewards you for playing as simulation as possible, does not have a good detail in the interior cameras. In these, everything is dark and unfocused, so you can not see the tachometer, or what gear you are in and the mirrors do not work as such.

Here we explain all The Pokemon Sword & Shield Controversies