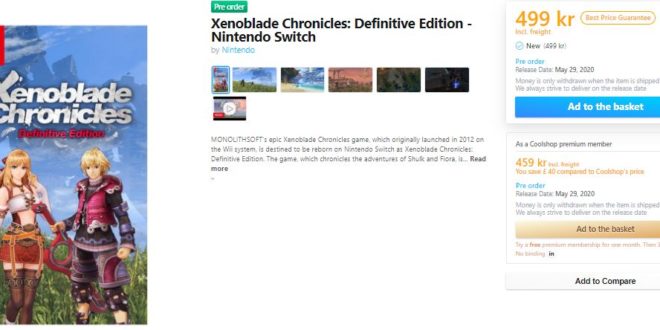 During a September Nintendo Direct presentation, the announcement of an enhanced re-release of Xenoblade Chronicles was made for Nintendo Switch. The company then presented a minute-long trailer and a few screenshots of the updated game but left all the details for the future.

When Xenoblade Chronicles: Definitive Edition will go on sale, officially yet too it isn’t reported, however, as it often happens, such information for developers is shared by shops. In the case of the updated “Xenoblade”, the source of a possible leak was the Danish retailer Cool Shop, which indicated as the release date of the project may 29, 2020.

Of course, so far this has not been confirmed by anyone, but it is worth noting that retailers often have access to information on the release dates of games, so this date can be quite real. In addition, May 29 falls on Friday – the standard day on which all Nintendo news releases .

In June, Xenoblade Chronicles will turn ten years old. The original game was released on Wii.

I was born to Play games. I related to Tokyo, Japan. Playing on Nintendo Switch is my hobby. Playing games is in my blood
Previous How to make joysticks for the Nintendo Switch from the original GameCube controller
Next A Japanese gamer creates a mosaic panoramic image of Tokyo in Minecraft