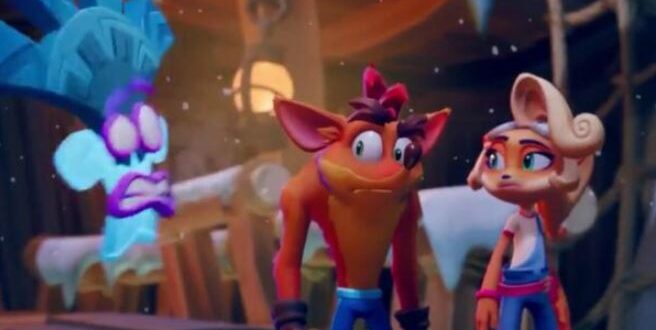 According to the Crash Bandicoot 4: It’s About Time PlayStation Store listing, the game has some form of local multiplayer. Below the description, the page clearly states “Offline multiplayer (2-4 players)”. There’s been no mention of multiplayer in any of the game’s marketing materials, so it’s unclear what this bullet point refers to.

The previous main Crash games have been single-player only experiences. Sure, you could pass the controller back and forth whenever you die for that old-school co-op experience, but there was no formal system in the game for it. And while developer Toys For Bob has confirmed that you’ll be able to swap between Crash and Coco at any time while playing Crash 4, which could indicate room for a drop-in/drop-out co-op mode, that only covers two players.

The broader Crash franchise has had plenty of multiplayer experiences – just look at Crash Team Racing and Crash Bash – so there’s plenty of precedent for gathering the whole gang for some bandicoot hijinks. But it looks like we’ll have to wait a while longer to see what form that takes for the more traditional platforming experience of Crash Bandicoot 4.

It could be some kind of co-op mode, or maybe a mode where players take turns speedrunning levels? Your guess is as good as ours. No doubt we’ll get some confirmation in the relatively near future.

I was born to Play games. I related to Tokyo, Japan. Playing on Nintendo Switch is my hobby. Playing games is in my blood
Previous TroubleDays releases for Nintendo Switch on July 9
Next Animal Crossing: New Horizons will get a swimming update next week