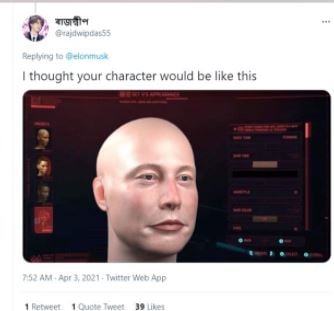 Elon Musk showed himself and his “cool car” in Cyberpunk 2077

Tesla CEO Elon Musk is always announcing weird and wonderful features for his cars, and his latest is gaming-related. The next Tesla Model S is going to be able to play Cyberpunk 2077 and The Witcher 3, two expansive open-world RPGs from developer CD Projekt Red.

Well, the world’s richest man (second richest? It keeps fluctuating) is a Gamer, and that means Elon Musk has expanded into a new role on occasion: game critic.

The past few days or so, Elon Musk has been doling out selective thoughts on CDPR’s Cyberpunk 2077, sparked by the revelation that the upcoming Tesla Model S will essentially have a gaming computer inside of it, and he said on Twitter that it could play Cyberpunk.

Musk seems to be playing Cyberpunk 2077 as we speak, so we’ll see if he has more thoughts about it to come. but a few days ago, he shared a photo in which he shows his hero from Cyberpunk 2077.

The businessman decided on a customized six-wheeled Villefort Alvarado in gold Vato colors. In order to get it, Musk needed to complete a secondary mission and defeat Caesar from the Valentino gang in a fight. A real achievement, Elon!

In the comments, his fans began to joke and make photo toads with Doge, because earlier the businessman had expressed support for the DogeCoin cryptocurrency.

I was born to Play games. I related to Tokyo, Japan. Playing on Nintendo Switch is my hobby. Playing games is in my blood
Previous A Tom Nook item from Animal Crossing: New Horizons found in reality
Next China-based developer earns more than Activision, EA, and Take-Two