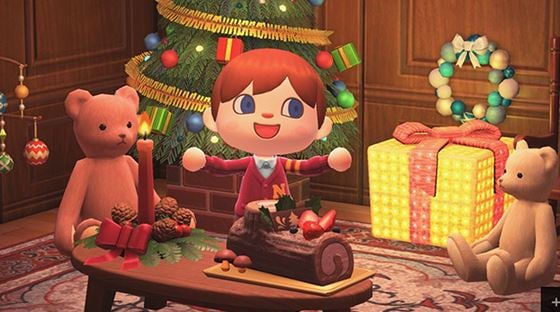 Animal Crossing: New Horizons, an in-game item will be given away with the next winter update!

admin 1 week ago News Comments Off on Animal Crossing: New Horizons, an in-game item will be given away with the next winter update!

Immediately following today’s announcement of the upcoming winter update to Animal Crossing: New Horizons, which we recall is scheduled for this Thursday, Nintendo has announced that it will be giving away an in-game item for all those who install the new game software.

Christmas is approaching and even Nintendo, as we learn from the press release released on the company’s Japanese website, has decided to give us another gift to sweeten this particular period.

In fact, should we not be able to share the most magical moment of the year with our families, we can do so at least through Animal Crossing and enjoy the typical sweet bûche de Noël together with our loved ones.

In fact, it will be the Christmas trunk (in French, bûche de Noël) that will sweeten the magical Christmas atmosphere, a trunk-shaped cake usually covered with chocolate or coffee cream and icing was born in France and then reached the other French-speaking countries. The delicacy recalls the tradition of the Christmas strain and is now widespread and recognized as one of the typical products of this period of the year.

We specify, however, that the way in which it will be made available has not yet been clarified: most probably, as already happened in the past with other similar rewards (for example with the Ring-Corning-Con contained in the previous update), it will be obtained through the arrival of a letter inside your mailbox.

And what do you think? Have you ever tasted this typical chocolate-covered Christmas cake? Let us know with a comment below.

I was born to Play games. I related to Tokyo, Japan. Playing on Nintendo Switch is my hobby. Playing games is in my blood
Previous The Lord of the Rings: Gollum will support DualSense haptic feedback and ray tracing
Next Oxford University spoke about the benefits of games on the example of Animal Crossing: New Horizons