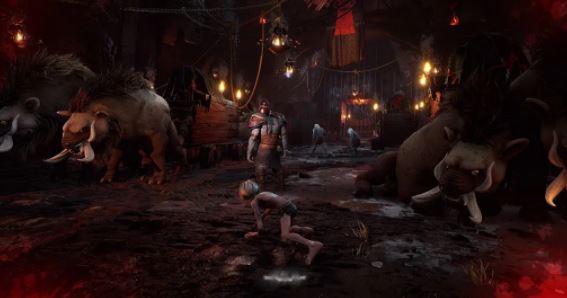 The Lord of the Rings: Gollum will support DualSense haptic feedback and ray tracing

admin 1 week ago News Comments Off on The Lord of the Rings: Gollum will support DualSense haptic feedback and ray tracing

The upcoming stealth adventure The Lord of the Rings: Gollum from Daedalic Entertainment will offer support for key features of PlayStation 5, including DualSense haptic feedback, super-fast SSD, ray tracing, and 3D audio.

In an interview, the Daedelic team explained exactly how these features will be used in their project. The advanced haptic feedback of the controller will allow players to feel how Gollum interacts with the world, and The SSD also reduces a lot of loading times and makes it easier for players to come back again after dying in-game. If they make a mistake in jumping or fall due to a misstep, they can quickly come back.

Ray tracing is used in The Lord of the Rings: Gollum to create realistic shadows so that players can navigate as efficiently as possible when making inconspicuous routes, taking into account dynamic lighting and moving lights.

“Gollum’s actions become more tangible and his physical struggle when he runs out of stamina translates directly to the way the game is played,” reveals Husges.

Husges praised the SSD of the PS5 and describes it as a game-changer. This allowed the developers to create large, detailed environments for the game. He revealed that these environments are freely explorable. Players will need to find different ways to escape danger or overcome enemies that are in the way in this environment.

The Lord of the Rings: Gollum is being created for PlayStation 5, Xbox Series X / S, PlayStation 4, Xbox One, Nintendo Switch, and PC. The release is due next year.

I was born to Play games. I related to Tokyo, Japan. Playing on Nintendo Switch is my hobby. Playing games is in my blood
Previous Seasons, maximum level increases, pokémon from Kalos: details of the Go Beyond update for Pokémon GO
Next Animal Crossing: New Horizons, an in-game item will be given away with the next winter update!