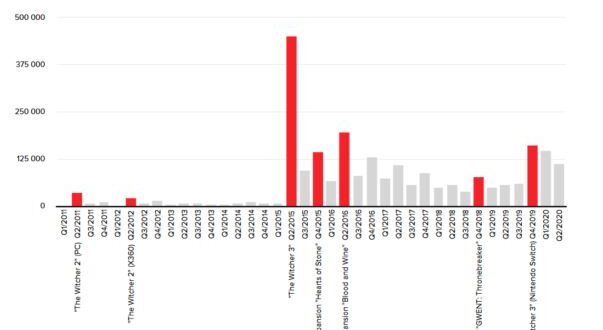 According to a report by the Polish publisher CD Projekt, its revenue for the first half of 2020 amounted to 364 million zlotys (about 97.2 million dollars). This is 69.2% more than the company received in the same period in 2019.

Financial growth was driven by the release of The Witcher 3 on Nintendo Switch in October 2019, as CD Projekt explained, as well as Gwent’s record revenue thanks to the release of the card game on iOS. The publisher’s revenue also increased due to the sale of merchandise for Cyberpunk 2077 and the release of Thronebreaker: The Witcher Tales on Switch.

The Polish company noted that external reasons also influenced the growth – primarily the self-isolation regime introduced in many countries in the spring of 2020 due to the Covid-19 pandemic. CD Projekt also attributed an increase in interest in games based on The Witcher amid the success of the Netflix series and the fall in the exchange rate of the zloty against the euro and the dollar as external factors.

Operating profit of CD Projekt in the first half of 2020 compared to 2019 increased threefold – to 147 million zlotys (approximately 39.2 million dollars).

The company has confirmed that the final round of Cyberpunk 2077’s marketing campaign and its release is slated for Q4 2020.

I was born to Play games. I related to Tokyo, Japan. Playing on Nintendo Switch is my hobby. Playing games is in my blood
Previous Madden NFL 21 Surpasses NFL 20 in Starting Sales by 20% Despite Record Low Metacritic Rating
Next Call of Duty: Black Ops Cold War multiplayer gameplay leaked online