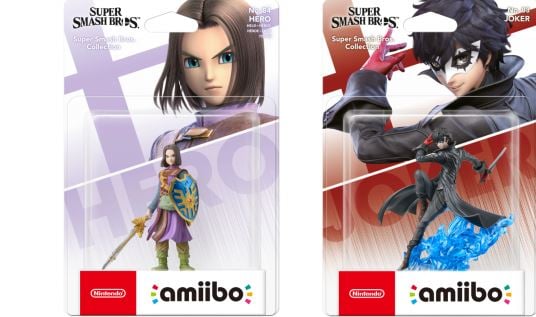 admin July 15, 2020 News Comments Off on Joker and Hero amiibo launch on September 25 in Japan and October 2 in America

The next wave of Super Smash Bros. Ultimate Amiibo is set to launch this fall featuring two of the game’s original DLC fighters, Joker and Hero, Nintendo announced today.

Earlier this year, it dropped the Dark Samus and Richter amiibo into stores. On October 2, two more Smash Bros. Ultimate fighters will join the amiibo lineup with the release of the Joker and Hero figures. Take a peek:

Recently, Amiibo have been released in spaced-out waves that have frequent drops in September, November, and January. If we do get more Amiibo announcements in the next DLC showcase, they’ll likely be pushed into that January 2021 slot.

With both Joker and Hero getting their figures, that leaves Banjo & Kazooie, Terry Bogard, and Byleth left on the board, along with the recently-revealed Min Min, who will be joining the game on June 29.

I was born to Play games. I related to Tokyo, Japan. Playing on Nintendo Switch is my hobby. Playing games is in my blood
Previous Details of improvements included in Super Mario 35th Anniversary Collection and Super Mario 3D World Deluxe are leaked
Next Final Fantasy: Crystal Chronicles Remastered does not offer offline/local multiplayer