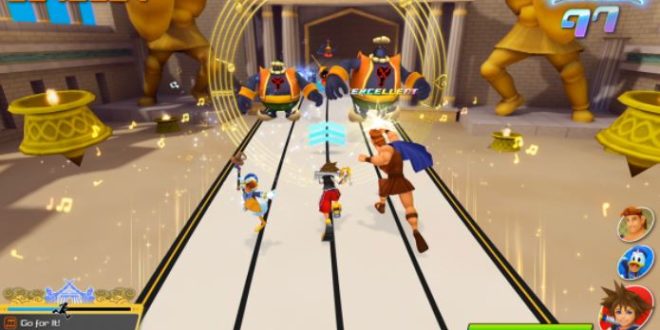 Square Enix has announced Kingdom Hearts: Melody of Memory, a rhythm game coming to Switch, PlayStation 4, and Xbox One later this year.

A trailer for a new game set in the Kingdom Hearts universe has been released.

The new game, Melody of Memory, will feature rhythm elements as players travel throughout several locations from previous Kingdom Hearts games. The footage features Sora, Donald, and Goofy running alongside a track shaped like a sheet of music and fighting the Heartless and other beasts. Players can also utilize the Gummi Ship to travel to other locations, while characters from Disney films arrive to lend the player strength.

The Kingdom Hearts 2020 trailer also shows a glimpse of what Square Enix is calling “Kingdom Hearts series 2nd Phase,” which has Kingdom Hearts 3: Re: Mind, Kingdom Hearts Dark Road, and Kingdom Hearts: Melody of Memory. There are also two empty spaces, which could be a new entry, re-releases on Nintendo Switch, next-gen ports, or really anything.

I was born to Play games. I related to Tokyo, Japan. Playing on Nintendo Switch is my hobby. Playing games is in my blood
Previous Bloodborne-Inspired Action RPG Morbid: The Seven Acolytes comes to Switch, PS4, Xbox One and PC
Next New Pokémon Snap releases for Nintendo Switch