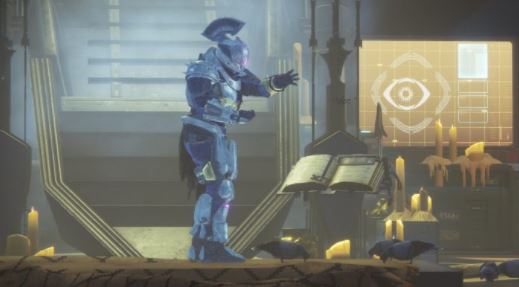 Everyone in Destiny 2 knows Saint-14 as the shining hero of mankind. But a new video makes you feel really guilty and shows the titans as an unscrupulous monster and supposedly even a baby killer.

This video was found: The season of the splicer is only 2 weeks old. However, players have now found a cutscene in the game data that will only be shown in the game in the course of Season 14. This video throws a completely different, very gloomy light on the “greatest titan who ever lived”, so Saint-14 (in English the 14th saint).

Since the video itself is not yet live, we issue a slight spoiler warning here. Anyone who does not want to look at the disturbing picture of the hero has been warned.

For us a hero, for others the killer of innocent babies?

Such a gruesome picture is drawn: In the video, Mithrax speaks, the leader of the Fallen House of Light and our ally, who will help us significantly in the fight against the Vex in Season 14.

His people, the Eliksni – known to us as the Guardians as the Fallen – were abandoned by the “big machine”, the traveler. Then a creature emerged driven by hatred. One then sees how Saint-14, depicted demonized, lifts up fleeting Eliksni and breaks their spine. His appearance is more and more like a monster.

We then hear that Saint could not quench his thirst for blood on the battlefields and afflict even the most innocent Eliksni. Given that we have recently seen the fallen with their cute and defenseless babies, Saint-14 is likely to be a child killer, because who would be more innocent? In the video, you can see a mother in front who tries to escape with her babies.

Then it is mentioned that this immortal monster is dragging its victims into its dome to stake and strangle them. The video ends with the frightened Eliksni staring at Saint-14 and Mithrax weeping for seeing their tormentor in the tower every day today. The Eliksni must learn to live with it if they are to survive.

The innocent and above all super-cute babies of the Eliksni are so popular with the custodians that they will soon also be available as cuddly toys:

That’s the shocking thing: The scary story about Saint-14 is well known to us. His iconic helmet is so dented because it used it to smash the skulls of those who had died on an assembly line. But for us these are the glorified fairy tales of a hero who saved mankind.

We players have helped the hero of mankind himself in the past to exterminate the fallen while using the protection of his light dome. And then we practically brought Saint-14 back from the dead so that he can now stand in the tower, where he prefers to feed pigeons.

But we ourselves have countless enemies on the curb wood, in the first Destiny mission we directly exterminate half a fallen tribe. Of course, as players we didn’t plunder villages or do anything worse, we just defended ourselves against aggressive opponents.

But it’s pretty interesting how we affect our opponents. Destiny 2 holds up a mirror to us and shows that behind the aliens there are not only insensitive villains but also their own sensitive peoples. What the horror stories of Oryx and Crota, who slaughtered countless allies, are to us Guardians, we are Guardians to the fallen – and especially Saint-14.

Did you listen here? At the very beginning of Season 14, we helped Mithrax bring his people to safety in the last town. Since then they have lived in the ruins of the old raid ” Scourge of the Past “. They set up a refugee camp there.

We see makeshift camp beds there, too little space, and mothers with children who fear for their existence. During the conversations there, we learn more about the history of the Eliksni and how hopeless and homeless they are.

But the fallen are also willing to survive and want to forgive the people. We hear that not all people are the same, just as not all the fallen are the same. Both peoples must learn to coexist – according to Eido, the daughter of Mithrax.

Fortunately, the peaceful coexistence works a little. In the tower we see some Eliksni helping human technicians study the Servitor technique.

Mass Effect Legendary Edition: How to use Face Codes and recover our character from the originals