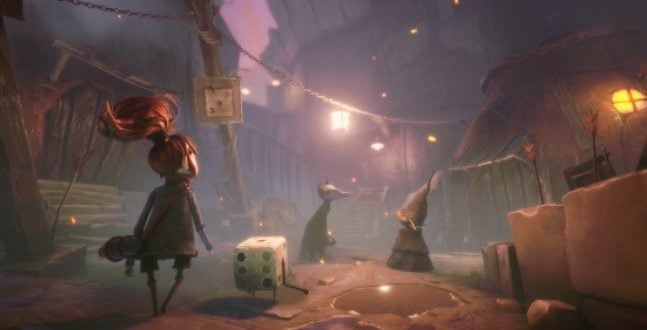 Fantasy action-adventure game Lost in Random will be released for Switch, PS4, Xbox One and PC

admin June 19, 2020 News Comments Off on Fantasy action-adventure game Lost in Random will be released for Switch, PS4, Xbox One and PC

EA revealed the first footage of Lost in Random, a new action-adventure game developed by Zoink, the studio behind atmospheric adventure games like Fe and Ghost Giant, as part of the EA Originals label.

The action is set in a dark fantasy world where a young girl is accompanied by a literal dice with arms and legs which acts as her companion.

“We recognized the inspiring vision, talent, and innovation coming from these independent studios and how that will become amazing game experiences for our players across the world, wherever they choose to play,” said Steve Pointon, SVP 3rd Party Content & Development at Electronic Arts. “The EA Originals label is all about delighting all of our players with stunning and diverse games coming from the very best and boldest independent studios across the world and supporting that talent to help realize their vision.”

“Everyone can relate to feeling helpless about juggling all the randomness and chaos that occurs in their life”, Zoink game director and CEO Klaus Lyngeled said. With Lost in Random, we hope to transport our players to an alternate world where they can find power in that randomness.”

Lost in Random will launch for PlayStation 4, Xbox One, Switch, and PC via Steam and Origin in 2021.

I was born to Play games. I related to Tokyo, Japan. Playing on Nintendo Switch is my hobby. Playing games is in my blood
Previous Apex Legends releases for Switch this fall, with full crossplay enabled with other platforms
Next Crash Bandicoot 4: It’s About Time has been rated for PS4 and Xbox One