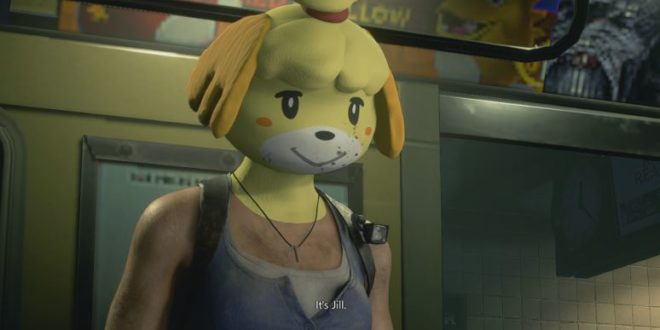 How long have you been playing video games? Have you ever played Streetfighter? Of course, if you’re a true gamer you’d say yes. you played the games on Pc But when Nintendo Switch released most of you stopped playing games on Pc.

Today we are going to tell you about a fan of Resident Evil 3 Remake. Resident Evil 3 won’t even be released until this Friday (April 3), but that hasn’t stopped some dedicated modders from getting in early doors, ensuring that players of the PC version of the game need not go a single day before experiencing RE3 as it was surely intended: with Jill wearing the bright yellow head of a cartoon Shih Tzu.

Creator Crazy Potato gives the mod a single-sentence description that sums up their decision to bring Animal Crossing’s unofficial franchise mascot, Isabelle, into the world of Resident Evil: “Jill is a fan”, they claim. While I’m not sure that’s official lore per Capcom, the mental image of Jill Valentine chilling to Animal Crossing during some well-deserved down-time is undeniably an endearing one.

I was born to Play games. I related to Tokyo, Japan. Playing on Nintendo Switch is my hobby. Playing games is in my blood
Previous How to get the TeleNook app on the Animal Crossing: New Horizons Nookophone
Next Phil Spencer explains Xbox’s good relationship with Nintendo