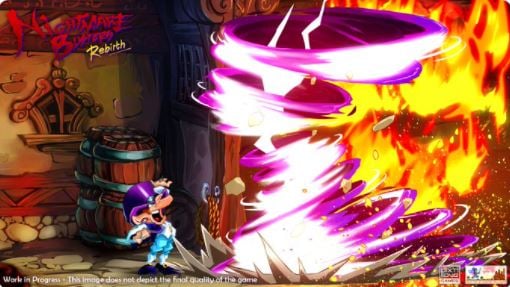 Nightmare Busters, a 25-year-canceled SNES game that never came out, gets a second chance with an adaptation for PC and modern consoles.

The vagaries of fate sometimes cause games that were believed to be lost forever to have a new second chance. It has happened with some retro games, which were canceled on their original consoles, such as Nightmare Busters. This game from the French studio Arcade Zone was supposed to have been released in 1994 on Super Nintendo but was canceled for financial reasons. Two decades later, its creators took it up again with the support of fans, and it was released on SNES cartridges. That was in 2013.

Now, as many years later, a new publisher, Pix’n Love Publishing, and the Aurora Game Studio have decided to rescue this game by developing a version for PC and modern consoles, which has the supervision of the original creators.

This modern edition, we can say remastered, completely updates the graphics, interface, and soundtrack, using traditional hand-drawn animation. The levels have also been redesigned, and the difficulty has been adjusted. Also, it added a two-player mode and other modes (speedrun, ultimate, museum …).

Nightmare Busters: Rebirth is currently in pre-production, so it may still be a long way from its release on PC and consoles (unspecified).

This case has reminded us of Clockwork Aquario, a Mega Drive game that never came out, but has brought together its original creators (Westone) to launch a version for PS4 and Nintendo Switch. Many times, it is the fans who rescue the heritage of retro video games and even modernize it like what Piepacker does, a platform that will allow you to play retro games online.

Zelda: Breath of the Wild in 8K and ray tracing is a next-gen showcase, in video