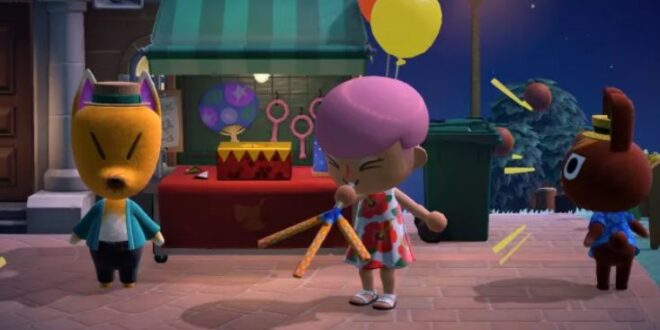 As planned, Nintendo has already detailed the following free update to Animal Crossing: New Horizons. This is the second summer update, which includes fireworks, dreaming, and the backup. Also, it has been confirmed that we will receive another free update in the fall.

Here is the official message released by Nintendo:

A dazzling array of colors is ready to explode in the night sky above your island’s abode as the soothing waves of the sea lap the shore. Hear the end of summer with weekly fireworks shows during the month of August when the second free update hits the Animal Crossing: New Horizons game for the Nintendo Switch console!

For those with a Nintendo Switch Online membership, the update adds the ability to sleep and dream in-game and visit other people’s islands. It also adds a new island backup service that allows Nintendo Switch Online members to back up the game’s saved file. These features can be enjoyed regardless of the hemisphere in which your island is located.
Available starting July 30, the free summer update adds the following features to the game:

Take some time to relax this summer and remember to have fun at the fireworks shows on your island getaway in Animal Crossing: New Horizons. Then comes the free fall update. Do not miss it!

I was born to Play games. I related to Tokyo, Japan. Playing on Nintendo Switch is my hobby. Playing games is in my blood
Previous Nintendo registers a new brand of The Legend of Zelda: Ocarina of Time in Australia and Europe
Next More than 500 people worked on Animal Crossing: New Horizons