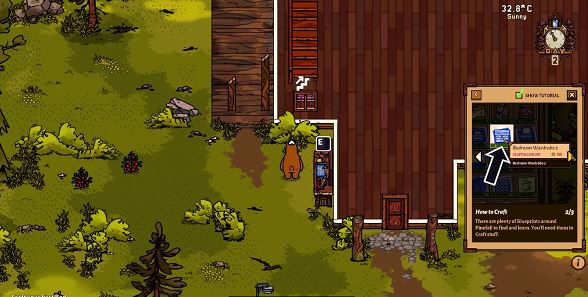 Bear and Breakfast is a life simulator game in which you’ll play as a Bear named Hank. You’ll cook breakfast for the humans and turn a shack into the finest B&B in the forest. At the start of the game, Barbara will tell you about her Cabin and that she needs your help to fix it. She’ll give you a couple of quests until she properly fixed all of the Eastern Cabin.

In this guide, we’ll tell you how to unlock the Crafting Table in Bear and Breakfast.

How to Unlock Crafting Table

You’ll be able to get the Crafting Table at the early game. You don’t have to make it yourself, in fact, Barbara will give you the Crafting Table as a reward, once you’ve completed her early quests. At first, Barbara will ask for your help to clean the Eastern Cabin from the garbage. You need to head down to the path from the shack and pick up all the garbage around the cabin and then go inside to clean all the garbage. After that, you need to return to Barbara at the shack and tell her that you’ve cleared the Eastern Cabin.

After that, she’ll tell you some resources that she needs to renovate the Cabin. She’ll ask you to get the following resources.

The first three resources can be gathered from inside the Eastern Cabin. Loot all the things inside the Eastern Cabin and you’ll get all of the first three resources. Make sure to loot the Upper floor of the Eastern Cabin as well. For the Stone Bricks, you have to go in the southwest direction until you reach the river. When you get there, you need to start looting all the shiny things you see on the bank of the river. You’d be able to find Stone Pile which are the Stone Bricks. Loot 10 of the Stone Bricks and make your way back to Barbara Shack. Tell her that you’ve gathered all the resources. She’ll go out to the Cabin, follow her to the cabin, and then she’ll fix the cabin.

After she has fixed the cabin, go inside the cabin and then come out of the cabin and talk to Barbara. Appreciate her effort and she’ll install a Crafting Table for you on the left side of the Eastern Cabin. After unlocking the table, you’ll be able to craft the furniture but in order to know the resources required for it, you’ll have to find the blueprint of the furniture to craft it. Barbara will also give you a blueprint of the Bedroom Bed with the Crafting Table.

Related Topics:Bear and Breakfast
Up Next

Bear and Breakfast: How to Craft Bed and Build Bedroom

Bear and Breakfast: Where to Find Stone Bricks