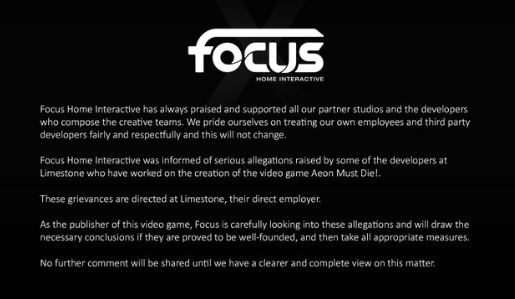 admin August 8, 2020 News Comments Off on Focus Home has responded to the Aeon Must Die scandal! – and sent complaints from former developers to the studio management

On August 7, Focus Home Interactive publicly announced that it was aware of the scandal in the Estonian Studio Limestone Games, which is creating the game Aeon Must Die in collaboration with the publisher!

Focus Home noted that it is aware of “serious allegations” that some developers have made. The day before, during a screening of the trailer for Aeon Must Die! at the state of Play presentation, employees of Limestone Games published a link to documents describing how they lost access to the game and rights to it.

Complaints from developers Aeon Must Die!, according to a statement from Focus Home, were sent to the management of Limestone Games — but it was with him that some employees had a conflict. Yaroslav Lysenko, the Studio’s General Director, allegedly secretly took away the rights to Limestone Games from its founder and creative director Alexey Nekhoroshkin, as reported by Nekhoroshkin himself.

Focus Home promised to carefully investigate the allegations of former developers and take immediate action if reliable evidence is found.

Until the situation is clarified, the publisher no longer plans to comment on the conflict.

I was born to Play games. I related to Tokyo, Japan. Playing on Nintendo Switch is my hobby. Playing games is in my blood
Previous Atlus is negotiating to expand its titles to more platforms following the success of Persona 4 Golden on PC
Next President Trump Signs U.S. Decree Banning Deals With WeChat and TikTok Owners