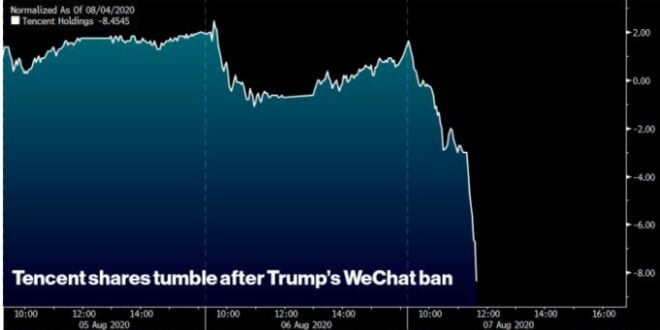 According to the decree, from September 20, transactions between American companies and the owners of WeChat and TikTok will be prohibited. The first service, which is a messenger, is owned by Tencent.

In a statement to the LA Times, the White House administration clarified that in the case of Tencent, the ban only applies to transactions that are related to WeChat. That is, the decree should not affect companies like Riot Games — it is based in the United States, but it is fully owned by Tencent.

As noted by Bloomberg, Apple and Google are at risk, since prohibited transactions may include placing apps in digital stores or, for example, buying ads in TikTok.

After the news of the decree, Tencent shares fell by 10%, which caused the company’s market value to fall by $ 30 billion. This happened before the white house clarified the details of the ban.

WeChat is the main messenger in China, which has an integrated payment system. Purchases are made through it, for example, in the local version of eShop on Switch, as well as an authorization on the Nintendo console in principle.

According to the decree, the app itself will not be blocked in the United States, but some local users are already concerned since WeChat is the only messenger that can be used without a VPN to contact people in China.

Donald Trump announced his intention to block TikTok in the United States in early August, but Microsoft wants to prevent this. The company is in talks with the owner of the bytedance app and intends to buy out its business in the US and some other countries to avoid the ban.

ByteDance and Microsoft must conclude a deal by September 15, while the latter will also have to pay a certain amount to the US Treasury.

As for WeChat, Tencent will probably try to appeal the decision, but so far there has been no response from the conglomerate.

I was born to Play games. I related to Tokyo, Japan. Playing on Nintendo Switch is my hobby. Playing games is in my blood
Previous Focus Home has responded to the Aeon Must Die scandal! – and sent complaints from former developers to the studio management
Next Apex Legends season 6 trailer directors talk about remote filming – motion capture was carried out via Zoom