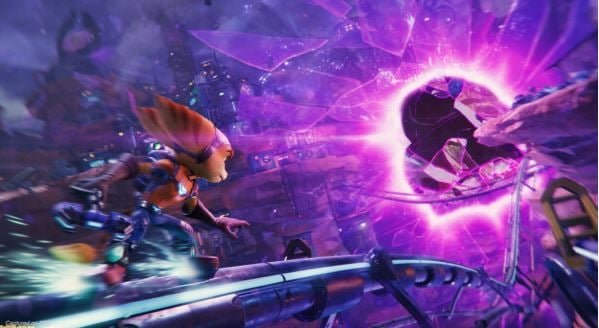 Shortly after the first reviews of Rift Apart were published, several of the developers involved in the game said that they had never once encountered a rework during the entire production cycle.

Grant Parker, who also had a hand in the canceled Star Wars: 1313, Marvel’s Avengers, and Rise of the Tomb Raider, started the discussion about this. The game designer noted that Insomniac’s game could be considered proof that crunch periods aren’t necessary for even AAA studios to succeed.

I'd appreciate ppl sharing this positive. Because it's important.#RatchetPS5 is at 89 avg score & I can't speak for anyone on the team but myself, but I didn't crunch once. 40h weeks the whole time.

It is possible to work on a great game w/o suffering.https://t.co/8GOzukf2sh

He was confirmed by at least two other colleagues, animators Lindsay Thompson and Jeff Weidner

I didn't crunch once, entire production. A couple late nights here and there finishing something up, but COMPLETELY CRUNCH FREE. It is possible. Team wellness lets the creativity flow free. https://t.co/Bf9C7BQLRn

The developers stressed that they could only speak from their own experience and understood that even the environment in different departments of the same company could be different. And Weidner assured that such statements were not a pretense or an attempt to “propagate”.

This is very true. I worked hard but never was compelled to crunch. If I put in xtra hours, it was my choice because I had something I was really xcited about & wanted it to look STELLAR. But I was actively encouraged by my leads and mgmt to keep my life in balance. And I did! https://t.co/MUHDi5o1ay

I know a bunch of us speaking out may feel artificial, but 1 – its not. No one asked me to say anything about my work habits or time spent making the game, and;
2 – it's important for people to know – we don't need to crunch like crazy to make great games!

The creators of Ratchet & Clank have been supported by many online users, both fans and others in the industry, rejoicing that the game’s creators didn’t have to make sacrifices.

Seeing one of my best friends launch a killer game without killing themselves to get there means a lot to me. https://t.co/8cQ4ghAUFx

Love to see developers sharing the positive stories. You can make amazing, impressive games without crunch. We need to collectively grow out of the mindset that crunch = dedication, and that passion cannot shine through games made in regular workhours. https://t.co/PCogmsRKwU

It most likely took Insomniac Games executives some time to start controlling systematic overwork amongst employees, too. However, in recent years it has been said more and more that they are succeeding in doing so. For example, it was also mentioned by Bloomberg reporter Jason Schreyer in 2020.

I don't think there was no crunch on Spider-Man – I think Insomniac is just better about maintaining a healthy atmosphere from the top down. There are many different kinds of "crunch"

Also, in an interview from February 2020, CEO Ted Price admitted that the studio does have periods of crunch, but that they try hard to keep them to a minimum.

It seems to me that in the last seven or eight years, conversations about this topic have become louder in our industry and we have started to be more honest about the harms of crunch. And I will say that we at Insomniac are constantly looking for ways to somehow notice and minimize our recycling.I would love to work for a company where there is no such thing at all. But I think we all understand: when a person tries to do something very difficult, something that nobody has done before, he will work very hard. And the best way out is to make better decisions as early as possible, so we don’t get “stuck” in that state.

Cyberpunk 2077 and CD Projekt having problems in China