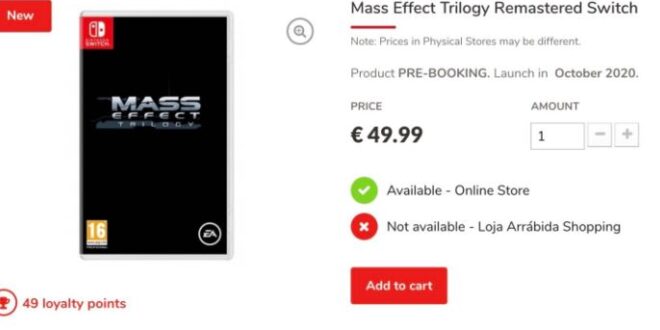 The long-rumored Mass Effect Trilogy Remaster was spotted on a Portuguese retail website earlier today. The listing has since been taken down. That’s it. That’s the story.

According to the listing, this upcoming remaster is a trilogy featuring the three Mass Effect games in a single package. Interestingly, it is listed cheaper for Nintendo Switch than PS4 and Xbox One. This could be a placeholder price for the remaster.

This slightly contradicts the previous report which stated that the game’s Nintendo Switch port would not be ready in time for the game’s original launch on Sony and Microsoft’s systems.

According to rumors, this remaster is reportedly launching later this year. The listing mentions PS4 and Xbox One as platforms in addition to the Nintendo Switch. If the remaster has substantial improvements, it can also come to PC knowing EA. There is no indication of what kind of upgrades will be offered with this remaster.

I was born to Play games. I related to Tokyo, Japan. Playing on Nintendo Switch is my hobby. Playing games is in my blood
Previous Among Us exceeds 85 million downloads on mobile and is already a sales leader on Steam
Next Nintendo 64 Games May Be Heading to Switch Soon