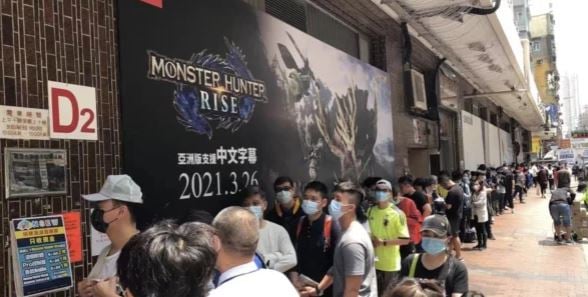 Capcom reported on the game’s shipments in a press release. For comparison, Monster Hunter World reached 5 million copies in the first three days, coming out on PS4 and Xbox One. Rise is currently available exclusively on Switch.

However, the exclusivity is only temporary – earlier Capcom confirmed that Monster Hunter Rise will be released on PC in early 2022.

Rise sold out in almost all retail stores in Japan a couple of days before the release, and in Hong Kong, the game was lined up.

According to analyst Daniel Ahmad, with the release of World, the Monster Hunter franchise has gained popularity in the West, while before that it was mainly aimed at Japan. Now, the international market accounts for approximately 70% of all copies of the games sold in the series.

Capcom was confident in the success of Monster Hunter Rise — back in January, the company raised its forecast for a record-breaking full fiscal year, based on early pre-orders of the game.

I was born to Play games. I related to Tokyo, Japan. Playing on Nintendo Switch is my hobby. Playing games is in my blood
Previous Cyberpunk 2077 leaked some upcoming free DLC
Next First estimates point to Monster Hunter Rise already exceeding 1.8 million units sold in Japan