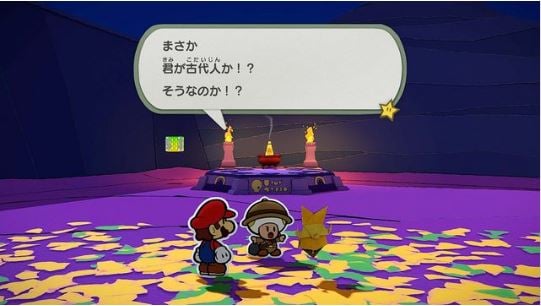 Paper Mario: The Origami King producer comments that aspects such as age or gender may not be visible

admin 2 weeks ago News Comments Off on Paper Mario: The Origami King producer comments that aspects such as age or gender may not be visible

We get really interesting statements related to Paper Mario: The Origami King. In a recent meeting with GamesRadar, Kensuke Tanabe, producer of this installment, has shared some details about how they plan one of the highlights of the series: the non-playable characters.

In the interview, he acknowledged that many times they cannot represent some characteristics such as age or gender in these characters, apparently due to restrictions from Nintendo. “From the production of Paper Mario: Sticker Star onward, we were no longer able to graphically represent individual characteristics, such as age, gender, etc., in non-playable Toads, so it has become much more important to simply convey their personalities through the text », he assures.

“Our writer, Mr. Taro Kudo, has been dealing with this difficult challenge since Paper Mario: Sticker Star, but he has made every text have a sense of humor,” continues the creative. “In this installment, Paper Mario: The Origami King, we were able to include some Toads with an outfit that matched their role, and we also created original origami characters.”

I was born to Play games. I related to Tokyo, Japan. Playing on Nintendo Switch is my hobby. Playing games is in my blood
Previous Animal Crossing: New Horizons is going to receive sewing and cooking
Next Nintendo is working on an update to fix the Paper Mario: The Origami King bug that prevents continuing