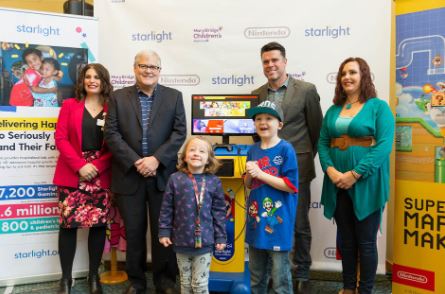 It seems that Starlight Children’s Foundation and Nintendo of America continue to collaborate for another year. This has been confirmed this afternoon.

Since 1992 , these two companies have been helping hospitalized children in North America. In this long collaboration, more than 7,200 play stations have been offered to more than 11.6 million sick children with SNES, Nintendo 64, GameCube, Wii and Wii U consoles. In recent years it is the turn of Nintendo Switch .

Specifically, today the new game station of the Mary Bridge Children’s Hospital in Tacoma, Washington has been presented .

“We’re incredibly excited to unveil the new Starlight Nintendo Switch gaming station and celebrate our 27-year partnership with Nintendo of America,” said Adam Garone, CEO, Starlight. “Over the years, Starlight Gaming stations have provided millions of seriously ill children with the healing power of play, entertainment, socialization, and emotional support, and have helped to normalize an otherwise scary situation or setting for families. We’re so grateful to Nintendo and their employees for such a long and continuing partnership fueled by innovation, impact, and generous support.”

“It’s been our pleasure to work with Starlight and observe them bringing happiness to kids when they need it the most,” said Don James, Nintendo of America’s Executive Vice President of Operations. “As with everything we do, we hope the new Starlight Nintendo Switch gaming stations will put smiles on the faces of children and their families.”

“The gaming stations are important distraction tools that normalize the health care environment and help kids through difficult experiences,” said Julie Hertzog, CCLS, child life supervisor at Mary Bridge. “They provide choices for kids, motivate them, and give them the opportunity to have fun when it is needed most.”

I was born to Play games. I related to Tokyo, Japan. Playing on Nintendo Switch is my hobby. Playing games is in my blood
Previous Nintendo’s powerful game console outsold Xbox One worldwide, According to vgchartz
Next Nintendo starts an eShop promotion that offers up to 50% off to celebrate The Game Awards 2019