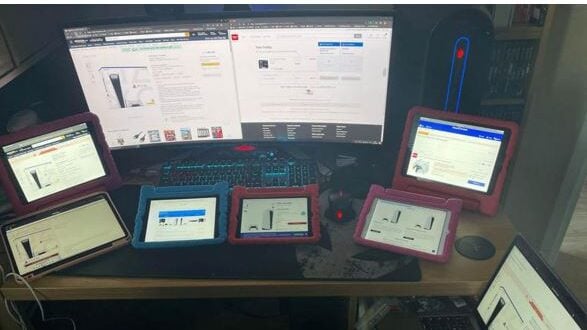 admin November 23, 2020 News Comments Off on A father spent 13 hours pressing F5 to get a PS5 for his child

A father from the UK required 13 hours glued to eight monitors to secure a reservation for the PS5 his son had requested.

If you’ve been one of the lucky ones to get a PS5, you’ve certainly had a hard time getting up early or even staying late at night to try and reserve one of the few units on the market.

The first consignment of PS5 arrived on 19 November for those who booked in September, but on the same day, new reservations were opened to receive them in mid-December, the last chance for people from all over the world to get their coveted PS5 before the end of the year, to fulfill all their children’s wishes for this Christmas.

Sure we all have a different story regarding our PS5 reservation, but we want to share a story of a father in the UK who has needed to make use of up to eight electronic devices and refresh the screen of each of them for 13 hours, to get a measly reservation.

Stephen Hill of Walsall in the UK was online from midnight on launch day trying to get one of the few bookings to be received by mid-December. In particular, he spent 13 hours and 20 minutes constantly updating eight screens until he managed to book a PS5 for his eight-year-old son Harrison.

But it wasn’t easy, because he used a laptop, a mobile phone, five iPads and a desktop computer with two open browsers. As soon as it was midnight on the day of the European launch of the PS5, bookings in the UK jumped.

Previously he had saved direct links to dozens of websites including Game and Amazon and even followed the availability of the consoles live. After much clicking, and practically burning the F5 button, he got a reservation at 13:20pm at noon, so he spent 13 hours and 20 minutes online without stopping to refresh the screen.

“Demand for the console was high, but I was very determined,” says Stephen, a 39-year-old father who had previously managed to reserve the Xbox Series X for another of his children. “At this time of year, all kids want to play the latest games, and whenever a new one comes out, it’s the same process. It’s what the kids have asked for and as a parent, you want to give them what they want.”

I was born to Play games. I related to Tokyo, Japan. Playing on Nintendo Switch is my hobby. Playing games is in my blood
Previous Jim Ryan says investing in new IPs is “very risky”
Next A group of Resellers from the UK managed to get 3,500 PS5