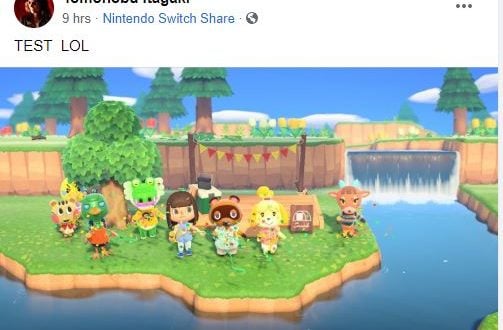 Tomonobu Itagaki, who is known as the creator of Dead or Alive series. He has posted a picture on Facebook that shows he is playing Animal Crossing: New Horizons.

Without any doubt, Animal Crossing: New Horizons has made a new record in many countries. In fact, this game has become the best-selling game in Russia.

This is a great success for Nintendo that New Horizons is being appreciated by many great game developers. Recently, the head of Xbox appeared playing ACNH. On the other hand, this game has also become the source of chatting. Many works are done through this game.

A few days ago, we told you how a company used this game for conversations.

I was born to Play games. I related to Tokyo, Japan. Playing on Nintendo Switch is my hobby. Playing games is in my blood
Previous Aliens Creepy Broadcast Returns to Animal Crossing: New horizons
Next Hackers can get your PayPal information via your linked Nintendo accounts