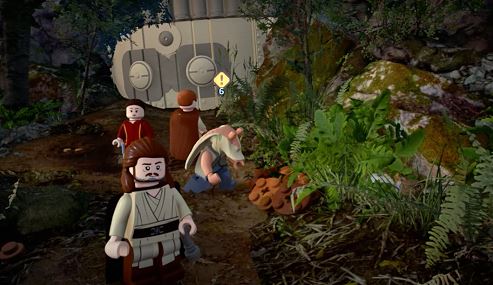 The third challenge level that’ll come in episode 1 in LEGO Star Wars: The Skywalker Saga will be Better Call Maul. To unlock this level, you have to pass through certain story checkpoints.

After you’ve completed the level The boonta Eve Classic, you make further progress in the story and you’ll unlock the next challenge level.

After the race, you need to follow the yellow icons to get to your ship because your ship will be fixed when you get there. Once you get there, a cutscene will play and you get attacked by the Darth Maul but you’ll escape from the planet Tatooine with the Queen Amidala. Once the cutscene ends, open the Holoprojector and go to the galaxy map section, and travel to the Coruscant, Federal District.

Once you reached the Coruscant, you’ll be playing as the Queen Amidala. Go and talk to the Palpatine to continue the story. You have to follow him to the ride that’ll take you to the Senate Building where Palpatine will be waiting for you.

Go into the Senate Building when you reach it, Palpatine will be inside, and to start the meeting talk to Palpatine. When you’ll talk to him there’ll be a cutscene and after the cutscene, you have to go to the Otoh Gunga on Naboo. Go to the same ride you came in and select the North Landing Pad where you come from the first time. After reaching the pad, follow the yellow icons and you’ll reach your ship and access the ship and open the map and go to the Naboo planet.

Once you’ve landed, you want to return to the hidden city The Gungan City. Once you’ve entered the city go to the place where you warned Boss Nass about the invasion. When you get there, he would not be there and Jar Jar would say that he would be in his sacred place and then you have to follow the Jar Jar.

The Jar Jar will take you outside the city from where you entered and just to the right side there is a head-shaped structure that is the entrance to a sacred place. Jar Jar will look for a key and the key will be broken but you have to rebuild the key and use it to open the gate to the sacred place.

By interacting with the ship you will get back to the theed hangar to take back the castle from the viceroy. In the cutscene, Darth Maul will also be there and you have to fight him in a boss fight.

You will have to beat Darth Maul in order to complete episode 1 level 3. Once you have defeated the boss. The level will end there and you’ll unlock the Free Play mode of this level.

How to Defeat Darth Maul in LEGO Star Wars: The Skywalker Saga