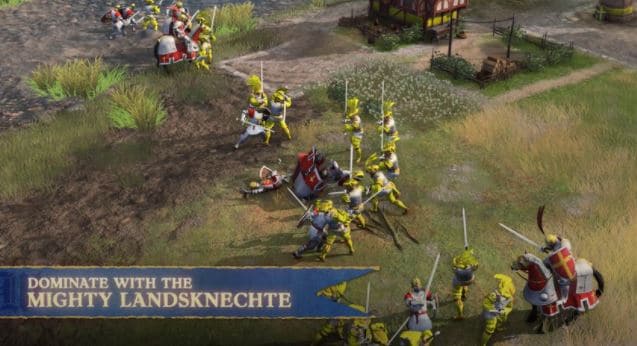 The development of Age of Empires 4 is slowly galloping towards the finish line. After a closed beta test recently gave a larger number of people access to a playable version for the first time, Relic has now revealed all the details about the last two factions at Gamescom 2021.

There should be eight races for the release, but they all play much more differently than in their predecessors.

In addition to a new trailer in which the two factions are discussed, we also had the opportunity to chat with the developers. In a detailed conversation, Game Director Quinn Duffy and Creative Director Adam Isgreen answered all open questions about the Rus and the Holy Roman Empire. If you want to see the trailer beforehand, then you have the opportunity at this point:

The Holy Roman Empire comes closest to a German faction. After all, the German emperors ruled here for centuries. These include illustrious names such as Otto the Great and Friedrich Barbarossa. The HRR does not get its own campaign. But one can assume that the troops of this great empire will still make an appearance in one or the other campaign.

There are two areas that characterize the Holy Roman Empire. First, there is their bulwark strategy. This faction shines especially on the defensive. No matter if units or buildings – attackers will have to fire from all pipes if they want to break these walls or armor. Buildings get a ton of upgrades to keep them safe from damage. In addition, an influence system ensures that buildings can withstand even more within a certain radius.

The second important mechanic revolves around religion and economic growth. According to Adam Isgreen, the Holy Roman Empire was one of the most powerful factions in development. And it owed that to religious buffs. In doing so, it almost ran away from other nations. The empire can, for example, place relics in all production buildings and thus increase productivity.

What are their special units?

There are no Teutonic knights this time. However, the developers note that the Holy Roman Empire can roll out very powerful upgrades for units. For example, normal units can be equipped with plate armor or two-handers. That makes them a kind of pseudo-special unit.

There is much discussion about who exactly is meant by the Rus. The historical basis is very vague and there is no clear consensus. Occasionally the Rus are spoken of as a kind of Viking people, others see them entirely as a people of Eastern European origin. In Age 4, the Rus will definitely not be Vikings, but come from the settlement area around Moscow, where their campaign takes place.

What makes the Rus special?

The Rus should feel like a bridge between east and west. That is why they combine elements from both cultures. On the one hand, they rely on cavalry, especially early in the game, and are real outdoorsmen. On the other hand, as the game progresses, they develop strong defenses and modernize their army with gunpowder.

Above all, the natural aspect of the Rus sounds exciting. This faction benefits more than any other from forests and game. The Rus have the best hunters and would do well to litter the map with their hunting lodges. After all, they generate not only food but also gold from slain wild animals.

It is very similar to the forests. The Rus can cut down forests like everyone else but should think carefully about it. Because intact forests also generate other resources such as gold. So these people have an interest in placing their buildings near small forests.

What are their special units?

The mounted archers would probably be worth mentioning as a third special unit. Even if they don’t play at the level of the Mongolian Mangudai. In general, the Rus get a lot of buffs for mounted troops, especially in the early ages. Later, however, the image of the horse army changed to a somewhat more modern armed force with many Streltsy units and muskets.

Related Topics:Age of Empires 4
Up Next

This is the island of BLACKPINK, one of the best K-pop groups of today, in Animal Crossing: New Horizons

Pokémon Brilliant Diamond and Shining Pearl could be set in Italy