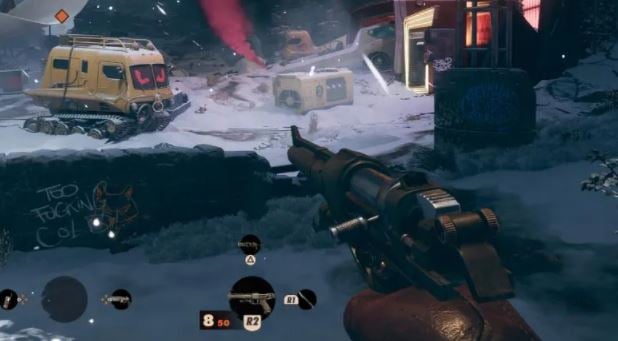 We explain where to find some of the best weapons in Deathloop, including the Heritage Shotgun, one of the most powerful, but hidden behind a great puzzle.

The best weapons in Deathloop don’t randomly drop from enemies, no. The legendary weapons, the gold range, are rewards for completing side quests, which you only find if you deviate from your main objective.

Here we tell you how to get some of those legendary weapons, very powerful, but also very difficult to obtain, so perhaps you can save them for a second replay of the game if you have already passed it.

How to get all the legendary weapons in Deathloop

This submachine gun has the advantage that you can fire non-stop, even while reloading. To get it, you simply have to assassinate Frank Spicer in Fristad Rock at night and collect the weapon.

These dual pistols can be combined into one submachine gun. It is in the Complex. Enter the excavation and move to the right, passing through the door with the red cross, until you find a closed bunker and four battery holes. One is on, the other is next to it, the other two can be found in the control room. They will allow you to open the bunker where the guns are.

This powerful sniper rifle can be found in Updaam , in the afternoon. You will hear that a gift has been left for you in front of the Dorsey mansion … but it is a trap: if you try to open it, other snipers will shoot you. Actually, the Sepulcher Breteira has the enemy who is in the window in front of the gift, in the corner where the bakery is.

This process is long. It is located in Karl’s Bay at night, and the first thing you need to do is enter the Las Simas del Lamento building. There you will see a map where some lights indicate the location of some chests, whose location is random except in two cases.

Watch out! You must open all the chests, but they have a trap, some will explode when you approach.

The other boxes are usually guarded by guards, and some by turrets or mines. When you have opened all the boxes, you will be able to enter the door now, but a final challenge awaits you, similar to the one in Hangar 2, but with more obstacles to avoid while activating the levers in 45 seconds, although you will not be able to use your powers.

How to activate the fishing sanctuary in Kena Bridge of Spirits

Changes to Turkey Day in Animal Crossing: New Horizons: how dataminers have discovered it