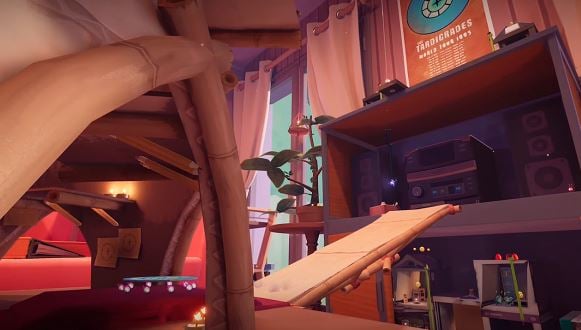 In this guide, we’ll be covering the first level of Tinykin in which we have to get the Banner Component from Solaria.

As the first level starts, Rimid will tell you to take the Banner from Solaria but she will not give up the Banner that easily and she also has a Relic which she doesn’t know what it does. Rimid will tell us to do something about the Relic so Solaria can give up the Banner. First, you need to pick up the red tinykin, the red tinykin will explode and you can use them to explode wooden materials that are blocking your path. Go to the Relic which is basically a Record and you’ll need 20 pink tinykin to carry the record.

After getting 20 pink tinykin, shoot the pink tinykin on the relic and the tinykin will grab the relic. Follow the tinykin and you’ll notice that they are going to put the record inside the record player but they’ll need a platform to get there. You’ll need to lower the platform. Go inside the candle area and go up where the tinykin would be holding the record. Go left from there and you’d see a rope in front of you. Go up from that rope and go outside. Go left from there and there’ll be a path to get on top of the candle area. Jump your way to the top of the candle area and then jump towards the red symbol. Once you are on the platform, you need to break the wooden boxes to release the platform. But before breaking the boxes, shoot the assistant of Rimid to create silk. Break both of the boxes with red tinykin and the platform will be lowered for pink tinykin.

After lowering the platform, you’ll fall down and you’ll notice that you’d have to fix the record player as well. Now, go towards the Xylophone stairs and grab the rope and go up then jump onto the other rope and go up. If you look down, you’ll see a Play Button of the Record Player that you need to fix. Grab the Play button and then use a rope on the side to go up. Use the Soapboard on the silk of the assistant to go towards the record player area. Aim at the missing play button and shoot it to attach the play button. The last thing that you’ll need is a tool that will pass the current from the broken wire to the player.

Go back where you find the play button and go towards the piano. You’d need to go straight from the piano on the leaves. Use soapboard and then use the soap glider to reach the leaves then go up on the shelves using the ropes and exploding the wooden objects to make a path. Once you are on top, jump on the pink chair and go down, there’ll be a button on the rest arm of the chair. Shoot a pink tinykin on the button to open the chair. Now go on the floor and explode the blocked way and you’ll find the tool. Shoot 6 pink tinykin on it and they’ll bring the tool to the record player and the record will start playing.

Solaria will be amazed to hear the record and she will give you the banner as a gift. Shoot the pink tinykin on the banner and follow them to Chrysal Workshop. Ridmi will tell you that the next component is in Foliana Heights and he’ll take us there and the next level will start.