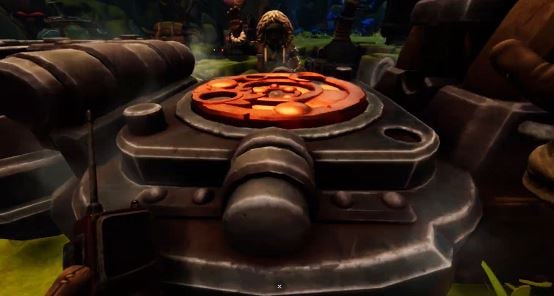 In this guide, we tell you how to solve The Forge Puzzle and get the component of the machine.

How to Solve the Forge Puzzle

The players have to look at the making of the ingredients and remember the process of it. Both of the players will also find the machines that will give them certain items that are required for processing to turn them into usable forms.

Now the hard part of this puzzle is that you have to make the component in the Cauldron within a time limit. Once both the players have pulled the lever at the same time, a timer will start and then both of the players will have to get the items and turn them into useful forms by using the machines. Then send the ingredients to the Cauldron so the tubes above the cauldron will fill and if both of the guys fill the tubes within the time then the component of the machine will be made and you solved this puzzle.

The machines that you have to use to turn the items into useful forms, required fuel to work. So, both of the players must have the fuel so that they can use the machines. The other thing is that the ingredients can also be split because each player has to send some ingredients to the other player, so he can use them in the machines which are on his side. The ingredients can be sent in the bowl through the river which is in the middle.

This puzzle will take a couple of tries because both the players have to learn the working of the machines and how much time they take so, they can manage the time according to the limit. All the machines are quite fast but the grinders and the machines that produce the liquid take more time. So, both the players should sort out everything on the first try, and then on the second try, they would have all the criteria of the process and can manage the whole puzzle within the time limit.

Once the tubes are full, go to the middle and use the lever to make the component of the machine.

We Were Here Forever: Ending