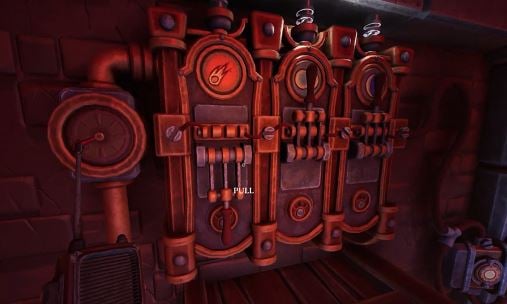 In this guide, we tell you how to solve the last puzzle of the game as this chapter only has one puzzle, and by solving that the game will come to end.

How to Solve the Last Puzzle of We Were Here Forever

To trigger chapter 6, both players must interact with the levers that’ll come up after putting all three components into the astrolabe. By interacting, a cutscene will play and after the cutscene, you get to the puzzle location and get to solve the puzzle.

To solve this puzzle you need to guide the light to the astrolabe machine and then interact with the astrolabe to open the portal on the wall to escape the Rockbury Realm.

For the next one, both of the players will have to go up the stairs on the left side and go up the wooden platform and interact with the levers one at a time to bring up the sphere ball to the required position. The sphere ball will light up and reflect the light to the next sphere ball.

For the next one, both of the players have to go through a tiny place behind the ladder on the right side and as the first player cross and steps onto the wooden platform, he would fall down and grab the ledge, the other player has to help him and move to the levers to lift up the sphere ball. The sphere ball will reflect the light to the last sphere ball in the area.

For the last one, one player has to go to the top through the lift so, the other player will rotate the crank and get him up. Then that player has to go up from the ladders on the left side and make way to the last sphere ball. Both players will see some symbols and the player on top would have three switches along with the symbols. He just has to interact with the switches from the right to the left side and the sphere ball will reflect the light to the astrolabe.

After the cutscene, the game will end but without spoiling it in the end you do have to make a choice of some kind.

That was all regarding the We Were Here Forever Puzzle guides.

We Were Here Forever: The Forge Puzzle