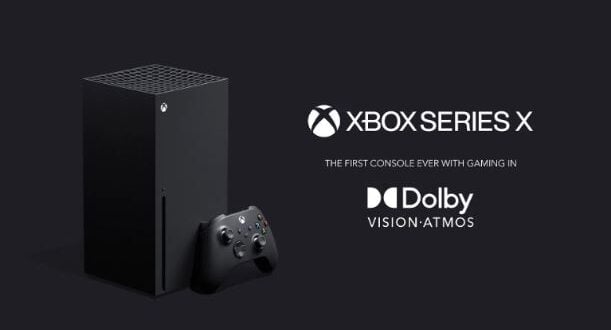 We knew that the Xbox Series X would ship Bang & Olufsen sound for a high-end audio proposition. We now know that Microsoft’s future console and its little sister, the Xbox Series S, will be Dolby Vision and Dolby Atmos compatible.

And they will also be the very first consoles to support these new technologies for video games. ” Xbox and Dolby are redefining the next-gen video game “, claims the sound and image specialist in all sobriety. Dolby Atmos will be supported by Xbox Series X and S games from the launch of consoles on November 10. Dolby Vision technology will arrive during 2021. Dolby Vision should have already been supported by the Xbox One X, but it has never been deployed for the general public at the gaming level, only SVOD content.

To improve the graphic quality of a video game, there are several techniques: increase the number of pixels to improve the definition of the image in UHD 4K 8K (or even more), bring more fluidity by increasing the number of images per second (high FPS) or opt for wide dynamic ranges (HDR) and wide color space. Xbox went for a combo of the set.

WHAT WILL THE GAME CHANGE IN DOLBY VISION AND DOLBY ATMOS?

It is an HDR (High Dynamic Range) technology designed by the American which relies on the ultra-realism of the image in terms of light intensity, contrasts, and colors. It ensures that the image presented to the viewer conforms to the original vision of the designer, usually the director. It is thus a controlled process from the calibration of the master in postproduction to the broadcast on a screen. Dolby Vision can support images with high light intensities, with a fairly large color space ( gamut ). To use it, the hardware must be certified by Dolby and this will therefore be the case for the Xbox Series X and Series S.

It is the sound counterpart just as qualitative. The three-dimensional sound that promises ” a leap beyond surround sound “. This should in particular make it easier for fans of shooting games who will hear the origin of the noise much better and will be able to react more quickly. The sound promises to be deeper and more precise, more detailed. You will obviously have to enjoy the sound via a compatible headset if you do not have the appropriate audio system (soundbar, home cinema, speaker, etc.).

By mixing the two, Xbox will offer games that faithfully respond to the artistic vision of their creators, more immersive too. “ The world as it’s meant to be seen, ” promises Dolby, in 12-bit, with 10 times deeper blacks and 40 times more brightness. The sequences of combat, explosion, or exploration in vast open worlds look promising visually, in particular, to dislodge the smallest details which should be much better in value on the screen. And if you’re lucky enough to enjoy a TV that’s also compatible, the experience promises to be beyond compare. Especially since Dolby Vision technology promises to adjust the image size to that of your screen automatically.

I was born to Play games. I related to Tokyo, Japan. Playing on Nintendo Switch is my hobby. Playing games is in my blood
Previous “We had no budget and time limits”: Indian Ubisoft spoke about work on the remake of Prince of Persia
Next Microsoft showed the Xbox Series S on July 1, but no one noticed it