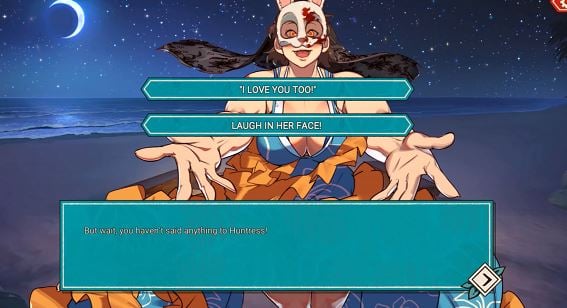 Dead By Daylight has announced its Dating Sim game in which you’d be able to date all the killers in Dead By Daylight. There are four characters that you can know and get close to which leads to a romance phase as well.

In this guide, we’ll tell you how to romance with Huntress in Hooked On You: A Dead by Daylight Dating Sim.

Every killer character has its own interests that you must keep in mind because that is going to help you to get closer to the character. The Huntress has the following interests.

Whenever you get a similar option to her interests, you always want to give that a top priority. As an example, if Huntress gets attacked by something, you don’t need to help her in the fight because she doesn’t need protection or if you find a trinket anywhere, you can grab it and give it to her. Other than that, you want to do the basic things that get you close to her meaning, hang out with Huntress, perform well in the minigames, and don’t kill her when you get the choice of eliminating one of the Love Island contestants.

You’ll also need to select some choices or answers while communicating with Huntress that’ll greatly affect how close can you get with her. The choices and the answers that you need to select while with her are the following.

When Huntress asked how attractive you think you are, select the “Average” option. Select ‘History’ as the best subject in school. Select ‘Red’ as your favorite color. Choose the “Volleyball Beach” picture for where to go. Choose the Volleyball Beach” picture again as your activity. “Accept” jerky from her on the beach after completing the hatchet throwing mini-game. Put the trinket in her hair. Choose “Huntress” to tell a story around the campfire on night one and join in singing with her. Don’t make a Joke. Choose to hang out with “Huntress” instead of the Spirit. Don’t try to protect her from the attacking crabs. When she asks about starting a family, select the “Of Course” option. Select “Huntress” when asked who should receive the flowers and who you want to spend the day with. Pick “Angler Fish Mask”. Pick the non-rotten mushrooms. The specific order to pick the mushrooms is: Left, left, right. Kill any of the romance options besides the Huntress. After going on a date with Huntress on the Trapper’s yacht and finding her four trinkets, you must then choose the “Underground Tunnel” instead of Forest. When you have returned to the cabin, say “of course” when her dead mother appears and say your intention is “to start a family”. Choose to help Huntress kill “Dwight and Claudette” so you can return to her cabin. Say “I love you too” to her on the final day.

Related Topics:Hooked On You
Up Next

HoY: Everything About “Hooked On You” Cosmetics

Hooked On You: All Minigames