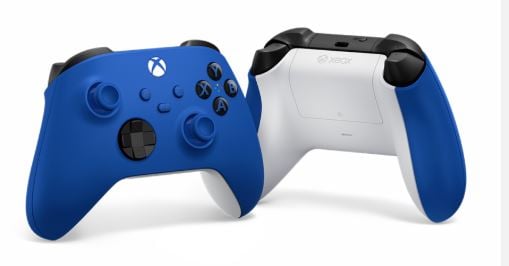 admin September 21, 2020 News Comments Off on Microsoft introduced a gamepad for the Xbox Series and PC in blue and a battery for its controllers

The Xbox Series X will come with a black updated controller, and the Series S will come with a white one. In addition, a third color — Shock Blue-will be available separately from November 10.

On the blue gamepad, the colors of the buttons with letters are more minimalistic-they are painted in the form of four dots.

In addition to this, Microsoft will release an updated bundle for PC. The next-generation Xbox controller will be available with both a wireless adapter and a wired connection via USB-C. In addition, it can also use Bluetooth.

In addition to the gamepads, Microsoft also introduced an updated version of its removable battery. It can be inserted into the controller instead of two batteries, and it charges up to 100% in about 4 hours-via a USB-C cable.

All gamepads, including the PC version, will work with significantly lower control latency than before. The “Share” button is also available on them.

Gamepads can be pre-ordered from September 22, as well as the consoles themselves.

In the near future, Microsoft also plans to update its Xbox Design Lab program, which allows you to create a gamepad, according to the individual preferences of the player. It is not available in Russia.

I was born to Play games. I related to Tokyo, Japan. Playing on Nintendo Switch is my hobby. Playing games is in my blood
Previous John Carmack is pleased that Bethesda has been taken over by Microsoft, perhaps returning to his titles
Next Hardcore PlayStation Fans Want Sony To Buy Konami In Response To Microsoft Bethesda Acquisition