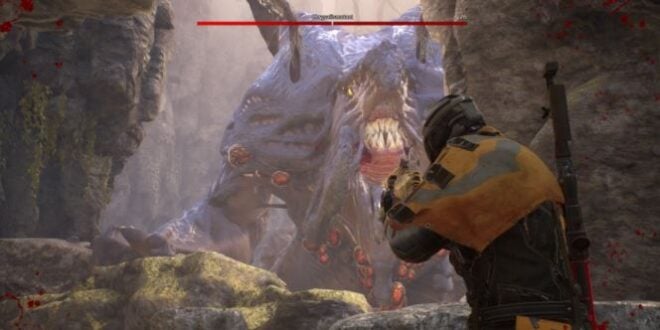 Ketty trump 4 days ago News Comments Off on Outriders: Farm Titanium quickly to upgrade your equipment

The entry into Outrider is simple: The game gives you weapons and armor to the hand that your levels are adjusted. If you advance in the world levels, you have to upgrade your equipment. In our guide, you will learn why titanium plays an important role and how you can get it.

What do you need titanium for? Epic and Legendary weapons, like other weapons and armor in Outriders, can be upgraded. At Dr. Zahedi, you can use the resources you have collected to improve related items. In the world of Outriders, you can mine iron yourself, but not titanium.

How do you get titanium? Titanium is dropped from mini-bosses and bosses, but with a low drop chance. It’s easier if you dismantle epic or legendary items. This will give you a safe source to get to Titan. We’ll explain below how to do this the fastest and most effectively.

The easiest way to get to Titanium is to lay bosses, which will drop your epic loot. This even works at world level 1, the lowest level of difficulty in Outriders.

How do you kill the gigantic lava spider? First-time players against the spider should study their attack patterns. In the three phases, she changes her attacks. Impacts are marked with a blue or red circle. Avoid these places and fight the little mobs to heal you. In the third phase, you run in circles and fire from the hip. With a little practice, you can put the boss down within a few minutes.

How do you kill the chrysalis mutant? At a higher world level, the boss can become demanding and difficult. During the first phase, stay on the left side of the rocks and take cover behind them. The closer you are to the boss, the more damage you cause. His weak point is the shoulders – so shoot them.

You evade his attacks by covering and rolling. In the second phase, insects spawn, kill them first, and avoid area attacks.

Another way to get hold of Titanium in Outriders is by completing bounty and hunter missions. As soon as you reach Trench Town, both mission types will be unlocked. Both order types guarantee you epic loot after completion, which you can then dismantle.

It’s easier in co-op: At a lower world level, you can lay bosses in co-op, collect bounties, and, as a hunter, farm titanium quickly and effectively. A well-rehearsed troop manages the bosses in under 5 minutes. With a little grind, you can get titanium so quickly and easily. The resource is extremely important, especially in the endgame during the expeditions. You can only pass this if you advance into the areas with the best equipment.

Previous Outriders: Serious bug can currently clear your entire inventory
Next Outriders: Update improves co-op on Xbox, but you should still play solo