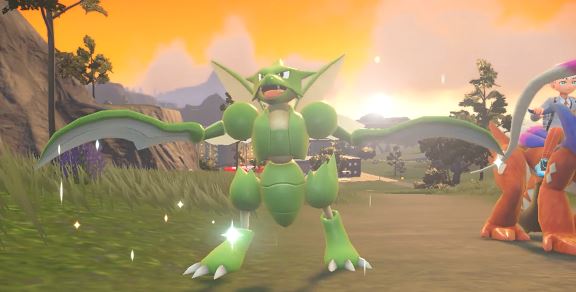 The Pokemon games players will have the idea of breeding the Pokemon and just like the previous games, the new Pokemon Scarlet and Pokemon Violet have Breeding mechanics that will allow players to breed a strong competitive Pokemon of the same species as its Parents. Since the new Pokemon game has changed the Breeding System, it might get a bit confusing in the process of breeding.

In this guide, we’ll tell you how to Breed Pokemon in Pokemon Scarlet and Violet.

The mechanics of Breeding the Pokemon have been changed in the new titles of Pokemon and unlike the previous games, players won’t be able to leave the Male and Female Pokemon of the same specie in the Pokemon Day Care or Pokemon Nursery. Instead, the players will be able to breed Pokemon by using the Picnic mechanics. The new Picnic mechanic in Pokemon Scarlet and Violet will let players start a picnic anywhere in the game at any time.

Initiating the Picnic will set out a picnic table and all of the Pokemon in the Party Poke Ball will come out. Players will be able to see their Pokemon running around and they can also interact with them. But most importantly, if you wait for enough, you get to pick up the Pokemon Egg from the Basket right next to the Picnic Table, and when the Egg hatches, you’ll get stronger Pokemon of the same species as its parents.

Now, after selecting the Pokemon in your Party, you need to set up the Picnic and wait for the Pokemon to lay eggs in the Basket. You can keep checking on the basket to see if there is an egg or not. To speed up the breeding process, you can also eat the food that has Egg Power buff. You can get this buff by eating Marmalade, Peanut Butter, and Fruit Sandwiches. If you have Fruit Sandwich recipes then you can start making the sandwich and then eat it to get the buff.

Now, wait for the buff to expire and you can kill the time by going AFK or washing the Pokemon. Once you’ve waited enough, you just need to go to the basket and interact with it to get the Egg. If there is more than 1 egg then you have to manually gather all of the eggs from the basket by interacting with it again and again which can be annoying sometimes. The Basket can hold up to 10 eggs so you’ll be getting a maximum of 10 eggs in a single Picnic with the Egg Power Buff.

Now, the last thing that you have to do is just run around and ride your mount until all the eggs are hatched. When an egg is about to hatch, the egg will fall down on the ground and you’ll get the animation of the Pokemon coming out of the egg. The Pokemon will take place of the hatched egg in your party and when all of the eggs are hatched, your party will be filled with stronger Pokemon of their parent species.

The players can later level the Pokemon up because they start from level 1 with almost the same stats as their parents so the child pokemon will have higher IVs after leveling up.

Pokemon Scarlet and Violet: How to Complete Medali Gym Test

Pokemon Scarlet and Violet: How to Fast Travel