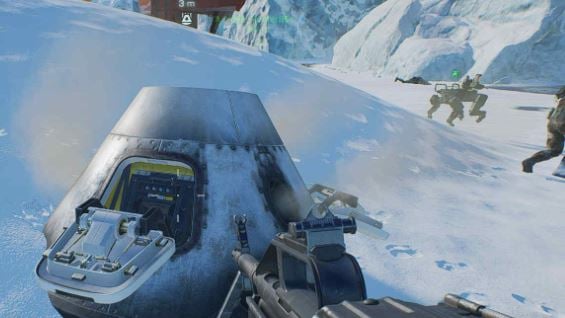 The new Hazard Zone mode combines Battle Royale with PvE elements and thus represents the third mainstay of Battlefield 2042. In this guide, we show you how you can capture more black market credits in Hazard Zone and increase your chances of survival!

How does Hazard Zone work?

Your goal is to recover data drives that you find in crashed satellites. You are always on the move as a four-person squad in the Hazard Zone and compete against five (Last-Gen) to seven (Current-Gen & PC) hostile four-person squads. In order to complete a match successfully, you have to escape with your collected hard drives by extraction.

But you also have to deal with AI-controlled occupation troops. Occupation forces mainly patrol areas where satellites have crashed.

How do I prepare for a Hazard Zone Match?

At the beginning of a match, you get an overview of the map, which provides you with information about the landing locations of the satellites with the hard drives and so-called uplinks. Uplinks are laptops that you can use to request vehicles, rangers, or reinforcements.

Take a good look at the map and make a note of the areas with uplinks and satellites – so you can start planning routes beforehand. In areas with a particularly large number of hard drives, you should expect enemy players and a lot of occupation troops.

You choose a specialist and then determine your primary and secondary weapons, which gadget you want to take with you, and, last but not least, the perks. Discuss the selection of specialists and equipment with your teammates in order to build the most diverse team possible. Assign a weapon to each player so that four people don’t run around with shotguns afterward.

Only the M5A3 rifle and a few perks can be freely selected from the start. All other weapons, gadgets, and perks cost black market credits. Stronger perks and weapons require more credits. Once everyone has chosen a specialist and their equipment, you will be thrown at a point determined by the game.

How important is teamwork in Hazard Zone?

Teamwork is much more important in Hazard Zone than in All-Out-War mode. On the one hand, you are always in four-person squads and only compete against other squads. This means that consultation before the match and communication during the match is of the utmost importance. If you don’t feel like having party chats, you can also communicate with the ping system . Mark opponents, weapons, uplinks, vehicles, and hard drives for your teammates.

What weapons and gadgets should my team equip?

Your squad should be as diverse as possible when choosing weapons and gadgets. Have at least one sniper with you and two people with assault rifles. Shotguns do a lot of damage but are of little use outside of hand-to-hand combat. Also, take a semi-automatic rifle with you for mid-to long-range firefights – the DM7, although one of the starting weapons, is extremely powerful.

In order for you to be able to find the positions of hard drives, at least one member of the troops must take the free scanner with them. Not only can you find crashed satellites, but you can also see enemies carrying hard drives. Your enemies are also able to scan the area for hard drives – you will be notified when enemies have scanned your position.

Ammunition is a rare commodity in the Hazard Zone. There are ammunition boxes marked on the map, but sometimes there are kilometers in between. Especially since at the end of the second extraction phase, there is no longer any time to visit the boxes. Therefore, a member should at least take the “ ammunition box ” gadget with them.

If no one in the team plays the sanitation specialist Falck, the “ medical box” gadget is a good substitute.

The maps are very extensive and you will often cover long distances. Vehicles attract more attention, but they also give you a high degree of flexibility because you can get from one point to the next faster. Furthermore, vehicles like the armored car are equipped with guns.

It is very likely that you will encounter enemy armored cars. In this case, you should equip the recoilless M5 or the C5 explosives. A team member should also take the repair kit with them so that you can bring damaged vehicles back into shape.

Even though vehicles like the armored car offer some protection, the whole squad shouldn’t be sitting in one car. The rocket launcher only costs 100 black market credits and is therefore equipped by many players. If you are unlucky, a good hit can destroy your vehicle and destroy the entire squad. Always take a second vehicle with you or look for vehicle uplinks .

You can choose up to three tactical improvements. At first, you can only fill one slot, but with each successful exfiltration, you unlock another slot. As soon as you lose a match, you will be reset to only one free slot.

Each improvement brings an advantage, but there are five tactical improvements that are particularly helpful:

At first, you won’t be able to afford secret deals, inside information, and faster healing 2. The best tactical improvement for beginners is equipment insurance. This way, your spending on equipment and tactical improvements is kept within limits, which means you can accumulate more credits faster.

Which specialists are particularly effective in Hazard Zone?

There are ten specialists at the launch. Each specialist has special skills that give you an advantage in combat. But there are a total of four specialists whose skills are particularly useful in the Hazard Zone.

Although Battlefield is actually known for its sprawling battles, you have better chances in Hazard Zone if you keep your head down. You will also receive black market credits for killing enemy players, but the main prize will be with the hard drives. Therefore, if possible, do not get involved in fights with other squads.

However, you can attack the occupation troops with a clear conscience. They are not exactly challenging and therefore do not represent a great danger. There are also credits for killing occupation troops. If you activate the tactical improvement “ Negotiated Bounty ”, you even get double the credits.

Farming Simulator 22: All Achievements and Trophies