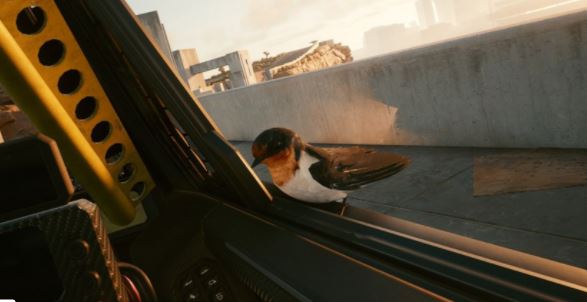 Ciri appeared in Cyberpunk 2077, but we didn’t recognize her?

admin January 3, 2021 News Comments Off on Ciri appeared in Cyberpunk 2077, but we didn’t recognize her?

The most anticipated cameo in Cyberpunk 2077 long before its release was undoubtedly Cyrilla Fiona Ellen Rhiannon, better known as Ciri.

Rumors that a destination girl would appear in the world of the future were so widespread that the creators of the game asked them not to ask them about it again. The game came out, Ciri was not in it. Or did we just not notice it?

One of the Cyberpunk 2077 players drew attention to an episode in one of the game’s finals: V wakes up and sees a small bird for a few seconds: it looks into the car, then sits on the wall, and eventually flies away into the distance.

Everything looks like an ordinary lyrical sketch, if not for one detail: before us is a barn swallow, the very bird with which Ciri is constantly associated (Zireael means “swallow” in the Elder speech).

In favor of the fact that the developers deliberately resorted to such an unobvious Easter egg “for connoisseurs”, it is also said that in the world of the victorious cyberpunk, animals are very rare, especially wild ones. The birds were completely exterminated at all in Night City itself and for thirty kilometers in the district, as one of the records says.

We add that the swallow is a symbol of good news, spring, and the revitalization of nature. So the final with her participation can be considered the most optimistic.

However, the theory about such an unusual appearance of Ciri in Cyberpunk 2077 has not been officially confirmed.

I was born to Play games. I related to Tokyo, Japan. Playing on Nintendo Switch is my hobby. Playing games is in my blood
Previous They were betting on Cyberpunk 2077 defeat. They made millions
Next New Pokémon leak points to Let’s Go, Eevee and Pikachu getting “easier” before launch