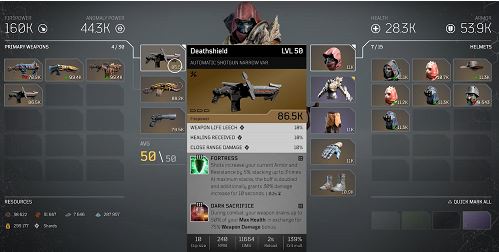 In this guide, we tell you an OP Trickster Build Guide that will let you deal maximum damage to the enemies and you can use it in the campaign to the endgame of Outriders Worldslayer.

We’ll go through the Weapons, Armor, and Skills that you want to run on this build.

The primary and the main weapon that you want to equip is Deathshield. Deathshield is a perfect weapon for close-range combat and we’ll be fighting in a close range with the enemies. This weapon has a ton of life leech that will get our health back while we fight the enemies. The mods that you want to put on this weapon are Fortress and Dark Sacrifice. Fortress will buff your current armor as you take hits and it also increases the damage by 30% for 10 seconds. Dark Sacrifice will drain 50% of your health in exchange for 75% of the Weapon Damage bonus.

For the Secondary weapon, you can use any weapon that you prefer because the secondary weapon will not be much of a use for this build.

The gear pieces you want to equip for this build are the ones that will greatly increase the close-range damage along with Cooldown reduction and bonus firepower.

For the head armor, you need to equip the Trespasser’s Cowl. It’ll give you cooldown reduction along with Bonus Firepower and close-range damage. The mod that you want to put on this is Captain Hunter which will let you deal 25% more damage to the bosses.

For the Chest piece, you need to equip the Enochian Outrider’s Breastplate. It’ll give you cooldown reduction along with Bonus Firepower and close-range damage. The mod that you want to put on this is Personal Space which will grant you a 25% bonus to close-range weapon damage.

For the leg armor, you need to equip the Predator’s Waistcloth. It’ll give you cooldown reduction along with Bonus Firepower and close-range damage.

For the skills, you want to equip Time Rift, Twisted Rounds, and Hunt the Prey.