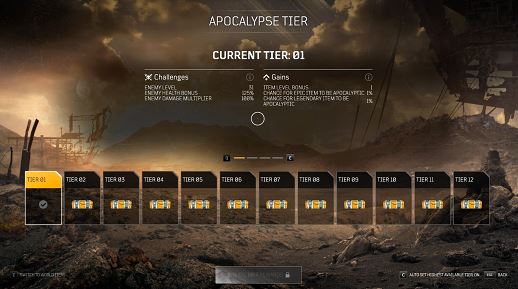 By completing a tier, you’ll get an Item Level Bonus, Ascension XP Multiplier, and Loot Rarity Bonus. You’ll increase the percentage of each reward as you unlock new tiers of the Apocalypse system. The World Tier system has a maximum of 30 Tiers and the Apocalypse Tier System goes a bit further than the World Tier system. The Apocalypse Tier System goes to a max of 40 Tiers and by reaching 40 tier, you’ll get the brand new gear that should take you to the level cap of the game which is 70+.

Unlike the World Tier system, Apocalypse tiers can be leveled up by playing any type of content that you want. You can play Vanilla Outriders, Campaign, or even farm bosses and you can just apply the current Apocalypse tier that you have to level up to the next Apocalypse tier. You can also choose the previous difficulty of the Apocalypse tier if you don’t want to farm more of the tiers but it will lower the rarity drop percentage and loot drop.

Other than that, you can just play the new Worldslayer content and keep grinding the Apocalypse tiers to unlock the epic and Apocalyptic gears.