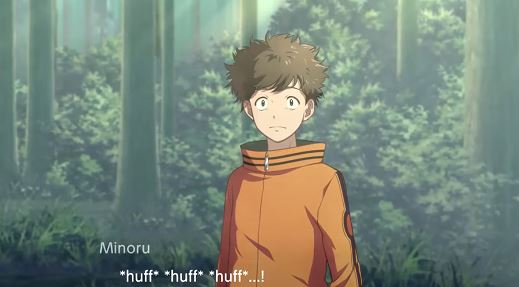 Digimon Survive is a Virtual Novel/Adventure game in which you’ll go along the stories and get Digimon to fight with other Digimon. In the Prologue of the Digimon Survive, you’ll get your first Digimon named Agumon.

In this guide, we’ll tell you the walkthrough of Part 1 of Digimon Survive.

Whatever choice you select, Falcomon will come there and defeat Gotsumon and save Minoru. After that, you’ll get to fight with the Gotsumon. Falcomon will begin to fight with Gotsumon and Agumon will join Falcomon in the fight as well. After the fight, Minoru will thank Falcomon for saving him and after the dialogues, Aoi will come to the shrine and will find Minoru and Takuma. Takuma will then get two choices.

Choose the option to talk to one of the characters and then Takuma will ask Digimon for the location of the school from the shrine and Falcomon will guide them to the school courtyard building. Agumon will ask Takuma what is school for and Takuma will get three choices.

Choose any option to answer Agumon’s question but Agumon will not understand your answer and Takuma will say that need to get inside the school so, they can take care of Labramon. After the dialogues, they will go inside the school building and Labramon will fall down as they reach inside the building. Aoi will go to the nurse’s office to look for the first-aid kit. After applying the first-aid kit to Labramon, she’ll feel good and all of the characters will be confused about what happened here and then they will hear the scream of Ryo from the second floor. Everyone will go to the second floor and Agumon will tell that Ryo is in the classroom. Ryo will be scared and he’ll tell everyone that he saw some ghosts and heard strange noises. Minoru will say to Takuma that he should take a picture with his phone to see if something is unnatural here.

Choosing any option will outcome as look for Aoi. After that, you’d get access to the World Map and you’ll unlock the map and locations of the school. The game will give you a tutorial on the Free Battle. The game will teach you how to talk to other Digimon in the fight and make them a friend. Go through the tutorial to befriend Betamon. After that, you need to look at each location you’ve unlocked in the school. After going to all the locations, open the map and you’ll see a Hexagon symbol with an exclamatory sign in it. Go to the location and talk to the characters to get a lead. Open the map again and then go to the next location with the same sign, it’ll be the classroom. Go and talk to Ryo and you’ll hear the piano. The music will be coming from the music room. If you go to the music room, the door will not budge and you have to open the map and go to the gym. Labramon will be there too and she will say that she can feel Aoi inside the Gym. The gym door will also not budge. Labramon will feel bad about it and Takuma will get two choices.

Choosing the second option will outcome in Lebramon looking for another way into the gym but she wouldn’t find any. So, it doesn’t matter what option you choose here. Open the map and then go to the Faculty Room. You’d find Lebramon there and she’ll tell you that she didn’t find any other way. Takuma will get three choices here.

After choosing any option, open the map and go to the Toilet. Agumon will tell Takuma that he can feel something in here. Takuma will then look for the clue. Look on the top on the right side and you’ll find an open ceiling. After that, Takuma and Agumon will go through the ceiling and come out in the music room. They will see two kids in the room boy and girl. The boy will tell us about the monster and tell us that there is a way to get inside the gym through the cafeteria. After the dialogues, Takuma will get three options.

Both of these kids are ghosts so, they can’t fight with you. Choose any option to continue. Takuma and Agumon will go to the cafeteria and everyone will already be there. Then they will find a secret path that leads to the gym. Labramon and everyone else will go through the secret passage and reach the gym. There they will find Aoi wrapped in the webs. Dokugumon will come there and then a fight will begin.

After that, everyone will go to the cafeteria and at the night, they can’t go anywhere else so, everybody decides to sleep in the school. Before they go to sleep, Ryo will say that they should have seen the ghosts and as Takuma tells him about the two ghost kids that he saw, Ryo will point the ghosts behind Takuma and everyone will scream and the part 1 will end.

Digimon Survive: How Do You Befriend Gazimon?