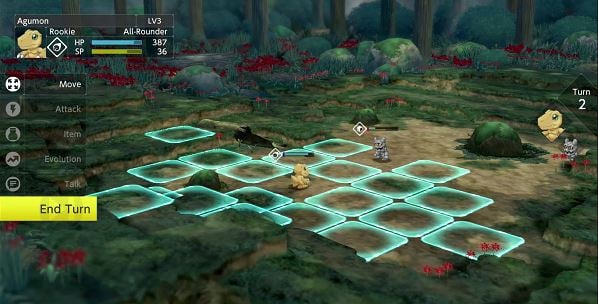 Digimon Survive is a Tactical Role-Playing game in which the main character of the game will have Digimon that will fight with various Digimon throughout the story. The players will find different Digimon by playing through the story and they’ll be added to your playable Units that can be used in the battles.

In this guide, we’ll tell you the mechanics of the combat of Digimon Survive.

Digimon Survive has tactical combat in which the fight is turn-based. The opponent and the player will get a single chance per turn in which they can perform their skill or defense against the attack of the opponent. The attack of the player or opponent will cost Stamina or SP. The SP is limited and all the attacks of Digimon will cost SP and different skills cost different amounts of SP. Along with the SP, the Health of the Digimon in the Battle is denoted as HP. Just above the SP bar. The winning rule of the battle is simple, the first one to take down the HP of the other Digimon will win.

In the battle arena, you’ll see some blocks as the match starts, the blocks will show the area of the battle and when you get your turn, you’ll also be able to move around the area by selecting the block once per turn and then attack with the skill or defense of your choice. When you get the turn, you’ll be able to Move your Digimon, select to attack with the desired skill, use an item during your turn, Evolve during your turn when Digimon gets fired up, can also talk with the opponent’s Digimon, and try to befriend it, or you can End Turn to pass the turn to the opponent.

In order to deal damage more quickly and win the fight, always End Turn on your first turn because Ending Turn without attacking will let you block the attack of the opponent and the opponent’s attack will only deal half of the actual damage. After the enemy has attacked, it would have lost some SP and also it wouldn’t be able to defend our attack because it just attacked. Choose the skill from Attack to deal damage to your opponent. You can also place yourself closer to the opponent and then attack but it can be harmful to you as well because, in the next turn, you’ll be closer to him as well. Once you’ve depleted its HP completely, the fight will be over and you’ll win the match.

You can also try to talk with the Digimon and the Digimon will ask you three questions that you have to answer and for each question, you’ll get four options. Only 1 of these options will be correct and when you select the right option of the question, the bar will fill up on the head of the Digimon. If you pick the wrong option then the bar will decrease and losing the bar will end the conversation and then you have to reload the checkpoint or savefile to start over. Once you’ll be able to answer all three questions right, three bars will be filled on the head of Digimon and you’ll get the choice to befriend the Digimon or ask for items.

Digimon Survive: How Do You Befriend Gazimon?

Digimon Survive: Everything About Digivolution