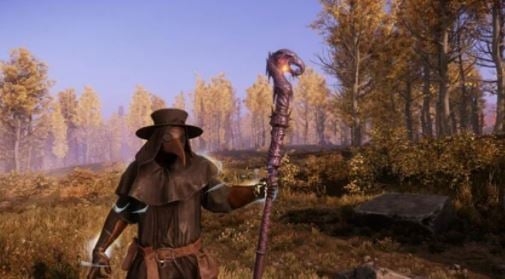 We give you all the keys so you can get the creepy plague doctor mask in New World.

There is a multitude of outfits that we can get throughout our games to New World, and one of the most popular is the Plague Doctor mask that was originally seen in the alpha version and that many players are now wondering how to obtain.

The truth is that as long as you are serious about leveling the character, you would not have much difficulty in obtaining the mask, which can also be achieved through the Halloween event where a multitude of cosmetics has appeared in the game store.

That is why we are going to tell you how to get the plague doctor mask in New World under the two procedures that exist right now.

How to get the plague doctor mask in New World

This mask has a lot of history since it was used by doctors during the bubonic plague epidemic of the 16th century and now you too can equip it to your character.

Of course, note that being a level five mask you will have to be at level 60 before you can equip it.

Getting it is extremely easy if you have already played a few games and you have taken it seriously. Of course, you must be in the syndicate faction and have reached the maximum rank of the alchemist by completing the faction missions and earning enough reputation.

Once you’ve reached the limit, you need to talk to the Syndicate Representative in a settlement and open the Armory, where you can purchase this mask for 30,000 Syndicate Tokens and 800 Coins.

You can also buy this plague doctor mask as part of the Halloween 2021 event by visiting the shop, although it will cost you 7,000 fortune marks.

You can get other items from the plague doctor such as robes, gloves, boots, and pants.

This is what each of them will cost you, and you can also get them through the syndicate armory:

Each piece has a gem slot and has +22 Constitution, +13 Corruption Resistance, and reduces maximum cooldowns by 2.6%.