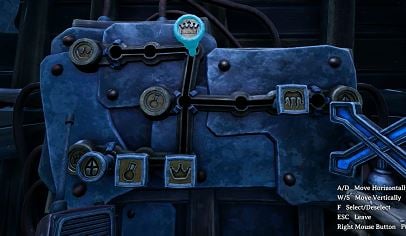 In this guide, we tell you how to solve the second puzzle of the game, the Catacombs puzzle.

How to Solve the Catacombs Puzzle

Open the next door to the mechanism and a player should find a film reel #5 on the boxes and head up to the stairs and there’ll be a film reel #2 on the bed. Pick both of the reels and you’ll see a diagram of arrows on the boxes where you picked up the reel #5. When the other player will open the next door, he would find a key, locked behind bars with a set of four dials. The person who finds the diagram has to tell the direction of the dials to the other player so, he would set the dials in the right order and get the key.

Now open the lock with the key and it’ll let the other player use the lift and come to you so, both of the players will now be together. Now in the same room, there’ll be a bookshelf blocking a door. You both have to push the bookshelf out the way and you’ll find another key and film reel #1 Now the players have to go above and use the key that they found and use it in the lock to use the lift again. Only one person can go on the lift.

The person who goes up should see a machine with symbols and has a timer. The other person can come in the opposite direction of this machine and will find the same symbols and a red thing that reveals a symbol and the symbol changes after the timer runs out. So basically, how this works is that in the opposite direction of the machine, the player will see a symbol on the red thing and then communicate the symbol to the other side of the machine, and that person will tell what lies directly above that symbol and communicate back to the person so, he can input the correct symbol in time. You have to do this four times in a row. If you enter the wrong symbol or run out of time, you’ll start from the beginning and have to do it four times again in a row.

Once the player has entered the right symbols four times in a row, a door will open and you’ll get a key, a Cog, and a film reel #4. Now you’d be able to open the door on the side by the machine and you guys can get together again. This key will also open the door with the film projector, which is to the right. Open the door and go inside, you need to place all the reels that you have found in the projector. Now start the projector from the 1st reel, and you guys have to remember all the steps shown in the movie and do all of that the teamwork.

When you’ve done the things shown by the projector then you’ll notice a lift has appeared next to the wall of the projector. Get on the lift and go to the second level. You’ll see a key, locked behind bars and four dials again, Now for this, another person has to go all the way down and to the other side of the chasm to find the codes and communicate with you so, you can open the locked bars and get the key.

Get the key and go to the other player, this key will let you open the lock on the lift and let you go to a room where you can find a big Cog. Go down to the turnstile and place both of the cogs on the right side of the turnstile. Now rotate the handles and a cage will come up. One person can go into the cage and the person has to hit the button outside the cage.

The person in the cage will go up and get locked in some type of vault and the other person will slowly go up to the new area.

We Were Here Forever: How to solve The Dial Rooms Puzzle

We Were Here Forever: How to solve the Prison puzzle