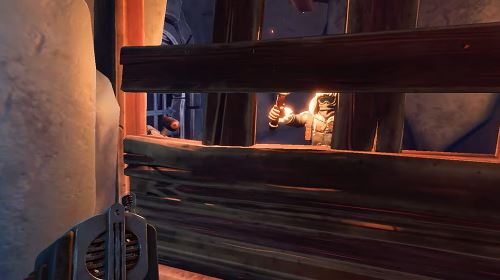 In this guide, we tell you how to solve the first puzzle of the game which would be The Prison, and that is where the game actually starts, in the prison cells.

How to Solve Prison Puzzle

Once the game starts, you and your friend will be in separated jail cells. After the cutscene, both of the players’ cell doors will be open and you get to control your characters.

This will also get the other player to move onto the next room as well. Both of the players will go to a new room that would have a chain mechanism to open the next door. It would be a timed mechanism so once you pull the lever, you have to run through the opened door. You both have to do this at the same time in order to get out.

After getting out of the room, both of the players would get a door with the symbol dials. But on every door a single dial would be missing, so for one player a dial would be on the desk and for another player, a dial would be sitting on the floor a few steps ahead. Pick up the dial and put it in the door to complete the door. Now you both would also have symbols drawn on the wall that you can see and you have to tell each other the symbols to open the door.

But this time you have to insert the symbols in the opposite direction so you have to put the innermost symbol first then the middle and then the outermost symbol. This will open both of the players’ doors.

After going through the door both of you will get torches so, you can see better in the dark places. You both will find another dial for the last door near the burner. So, pick the dial and put it in the door. There’ll be a last symbol on the wall at the beginning of the room so, just tell each other the symbols and open the door. After that, you both will get to see each other but the path will be divided. But you’d be out of the prison and you guys will make your way to the next part of the chapter which would be the Catacombs.

We Were Here Forever: How to solve The Catacombs Puzzle

Eiyuden Chronicles: Rising: Get Me Some Furs Quest