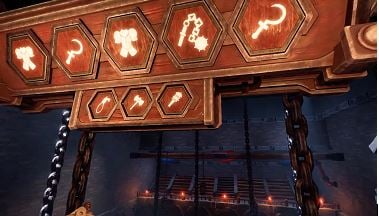 IN this guide, we tell you how to solve the Trail Rooms Puzzle.

How to Solve the Trial Rooms Puzzle

After getting through the Dial Rooms Puzzle the players will move on to the next puzzle which will be the Trial Rooms Puzzle. The person who was in the projector room in the previous puzzle will be above the arena and has to communicate with the other player who will be going to pass the trial rooms.

When the person reaches the arena, there’ll be a door on the left side from where he has to go up and pick up the ball. As he picked up the ball a trial floor will be lowered down and the symbols will be shown to the other player. The player above the arena has to communicate all the symbols to the player who is going to cross the trial with the ball in hand.

The third trial room is like the first trial room, you just have to go through all the symbols in order. The only difference in this trial room is there’ll be tiles with the “X” symbol. You can’t step on the X symbol so, the player above has to tell you the way around these tiles and onto the correct symbols.

Once the player has reached the end the door will open and would be able to place the ball outside the door. Go through the door and the other person would also be able to join you.

We Were Here Forever: How to solve The Dial Rooms Puzzle