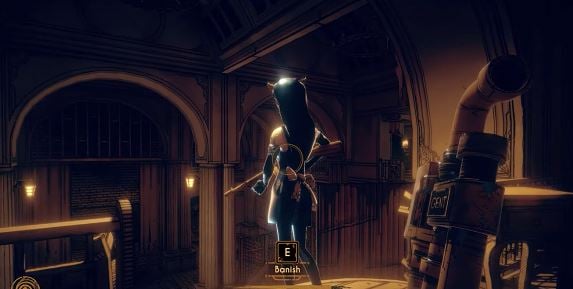 Audrey will be held captive by Alice Angel and she is obsessed with getting her face back. She has created a special puzzle in which she’ll fry Audrey and get her face if Audrey failed to solve the puzzle. However, after solving the puzzle, she’ll get pissed and she’ll bring out a Tommy Gun to Kill Audrey.

In this guide, we’ll tell you how to kill Alice Angel in Bendy and The Dark Revival.

After solving Alice Angel’s Puzzle, you’ll go through the door behind Audrey’s chair and will find the Gent Pipe. You need to kill a few Ink Monsters and then go to the machine to absorb its lightning and then go to the right side on the Electric machine to charge up the Gent Pipe. Now, go up the ladder on the right side of the machine and you’ll encounter Alice Angel.

Alice Angel will have a Tommy Gun and she’ll start firing at you when she sees you so you need to move behind the cover and use the Flow ability to cross a distance at once. What you need to do here is to find a way to get close to Alice Angel and in order to do that, you need to open the door by activating two different controls.

One of the controls that you need to activate will be on your right side and the other one is on your left side. First, go to the right side and you’ll see a ladder going up. Go up the ladder and you’ll see a door that can be unlocked by charging it up. Use your charged Gent Pipe to open the door and inside that door, you’ll find the controls. Interact with the lever to pull it and that is one down and one more to go.

Now, go out of the room and jump on the boxes and look up. You’ll see a space from where you can get up and you need to use the Flow ability to get up there. Once you’re up there, unlock the second door with your charged-up Gent Pipe and you’ll find the second controls. Pull the lever to activate and the door will be opened on the right side.

After activating both of the controls, Alice will shoot down more boxes on the right side which you can use to get up on the other side. Now go down and use the Flow ability to cross to the other side and then jump on the boxes and use the Flow ability again to get up on the high level. You’ll go through the door that you opened and then you need to crouch down and slowly approach Alice Angel from behind.

You’ll get the Banish option when you reach her and a cutscene will play in which both Alice Angel and Audrey will fall down and then Alice will kill Alice Angel by stabbing her through the heart.

Related Topics:Bendy and The Dark Revival
Up Next

Bendy and the Dark Revival: How to Solve Alice Angel’s Puzzle