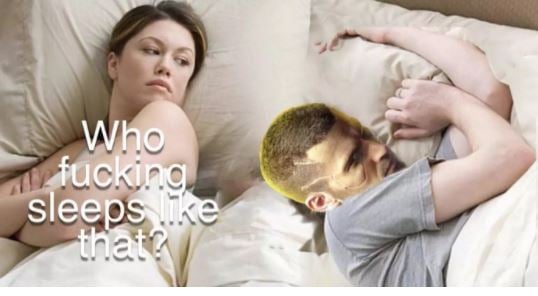 The thing is that the first-person animation of V looks like he goes to sleep across the bed, which is why his legs should hang down. Soon this became the occasion for various absurd memes and even serious disputes on the topic of how the main character actually sleeps.

With the help of a free camera, players found out how V actually sleeps, and in early January 2021, a mod with a third-person mode was released for Cyberpunk 2077, after which they began to learn about the find outside the community.

V actually lies across the bed with his legs hanging over the edge, as many users have suggested.

At the same time, the players noted that such a bug can only be seen in V’s apartment. In other places, the hero goes to bed in the usual way – and the animation of falling asleep in the first person does not look strange. Apparently, this is due to the non-standard arrangement of the bed in V’s apartment.

The developers themselves did not comment on the “virus” bug, but it may be fixed in future updates. The first major update is scheduled for January 2021, and the second should be released in February.

Recently, CD Projekt RED rejected rumors about plans to rework Cyberpunk 2077 in the spirit of No Man’s Sky and return previously cut content. According to one of the employees, the information specified in the network does not correspond to reality.

I was born to Play games. I related to Tokyo, Japan. Playing on Nintendo Switch is my hobby. Playing games is in my blood
Previous The fourth lawsuit filed against Cyberpunk 2077 developers
Next Fans Ask CDPR for Next-Gen Update to Include Third-Person Mode for Cyberpunk 2077